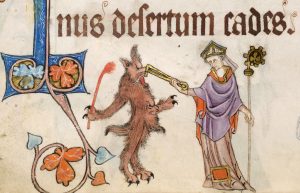 Today the Church honours St Dunstan of Canterbury, shown here – the story is that he pinched the devil’s nose with tongs.
It is also the twentieth anniversary of the death of Monsignor Peter Strand, former Parish Priest here and then after that at Hayes. May he rest in peace. His funeral here was attended by nearly a hundred priests as he had supported many through the diocesan ministry to priests programme and had been secretary to Archbishop Cowderoy.