As parish priest of St Edmund’s, it gives me great joy to welcome you to the website of the Roman Catholic Church of St Edmund of Canterbury, Beckenham. St Edmund’s is a warm and welcoming community of faith, the parish community is a mix of all ages, races and cultures. The 60 or so groups in our parish testify to her vibrancy – see HERE. This vibrancy draws from the faith, as well as the diverse and multi-cultural make-up of the individuals in the community. We are situated at 20 Village Way, Beckenham, in the London Borough of Bromley, and are a parish of the Roman Catholic Archdiocese of Southwark. Tune in to our online live streaming service and see our masses and services live online – click HERE.

It is my hope that our website provides you with the information that you seek.

Thanks for visiting, and I wish you every blessing!


God Our Father, We ask for your blessings on our Parish. Pour out upon us the gifts of your Spirit and grant us a deeper understanding of your Word, a generous dedication to your service, a growing compassion for those in need, a greater appreciation for the uniqueness of every person, so that your love may grow among us, and your Kingdom come, through Christ Our Lord, 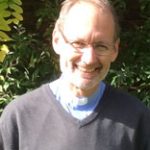 Fr. Steve came to St. Edmund’s in September 2015. He studied for the priesthood at the Beda College in Rome and was ordained in 2001. His previous parishes have been Holy Innocents (Orpington), St. Teresa’s (Ashford) and St. Simon Stock (Walderslade). Before being appointed as Parish Priest here, he took a sabbatical ending in North Wales where he completed a thirty day silent retreat at St. Beino’s Ignatian Spirituality Centre.

Father Ashley Beck has been Assistant Priest in the parish of Beckenham since October 1996. He was born in 1958 and was educated in Southampton and Oxford. A former Anglican priest (1986 – 1994) he is married to Caroline, a Social Worker and Psychotherapist, and they have two daughters, Martha and Iris (and two cats, Jemima and Oscar). Father Ashley Is chaplain to St Mary’s Primary School and edits the parish newsletter and the parish Facebook page. Since 1999 he has also been Dean of Studies of the Diaconate formation programme which covers most of southern England and Wales, which has since 2008 been linked to St Mary’s University, Twickenham, where he is an Associate Professor and Programme Director of the Foundation Degree in Pastoral Ministry and the MA degree in Catholic Social Teaching. He also teaches in the Pontifical Institute which is part of the university, the Mater Ecclesiae College and is also an Affiliate of the London Gateway of Notre Dame University in Indiana. He is a member of the editorial board of The Pastoral Review, represents the Catholic Bishops Conference of England and Wales on the Management Committee of a research body known as Faith in Europe, is a theological advisor to the Department of Social Justice of the Bishops Conference, and is currently President of the Catholic Theological Association of Great Britain. He has published works on Freemasonry, the Patron Saints of Europe, Monsignor Ronald Knox, St Oscar Romero, Dorothy Day, the Euro, Thomas Merton and Pope Benedict XV. 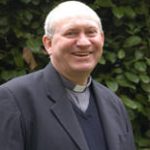 Deacon Seán ordained into the Permanent Diaconate in 2006, following a career in the Civil Service. He has particular responsibilities at St. Edmund’s in respect of the Confirmation programme, Extraordinary Ministers of Holy Communion, as co-chaplain at Bishop Challoner School, and to the Parish SVP. Deacon Seán manages the Baptism programme. He is also the chief for welfare and development in the village of Nankesido in Ghana with particular responsibilities to improve the educational prospects of the children and young people there. 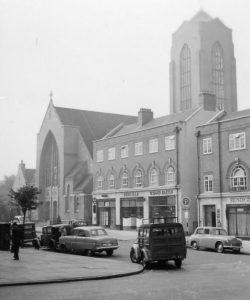 St Edmund’s is a large late Gothic Revival church built in 1937-8 and was designed by J. O’Hanlon Hughes, who also  designed  the  furnishings  and   fittings. The  Buildings of England volume states that without the vault ribs and ‘other fusinesses’ the church ‘would … be worthy of Sir Giles Scott himself’. A major reordering took place in about 2000. The tower has townscape value and the church is locally listed.

The mission was founded in 1891, with Fr W. H. Kirwan the first priest. A piece of freehold land was purchased in Overbury Avenue. On 27 October 1891, Bishop Butt laid the foundation stone for a church dedicated to the Transfiguration and St Benedict. The first part of the church was opened in March 1892. Due to a lack of funds it was intended to build it in phases. The first section for £1,500 comprised the sanctuary and part of the nave, with an attached presbytery. The architect was R. A. Boase,  and  the  style  was  classical,  executed  in  brick.  It  had  three  stained  glass windows by Westlake. It seems unlikely that the second phase was ever executed.

In 1920, Beckenham became an independent parish. Land was acquired in Village Way, where on 24 April 1927 a new temporary church dedicated to St Edmund of Canterbury was opened. By 1935 the presbytery was at 35 The Avenue, and plans were in hand for a new church and presbytery at the corner of Village Way and the High Street. In 1937 the estimated costs were: £15,500 for the church, about £1,000 for the furnishings, and £3,400 for the presbytery. Funds were raised by the sale of church land in the High Street and elsewhere. A ‘club hall’ was to be converted for use as a parish hall, on the site of the current hall.

On 3 July 1937 the foundation stone was laid by Bishop Amigo and the church was opened in 1938. The architect was James O’Hanlon Hughes FRIBA (1894-1967),  who also designed all the fittings and furnishing. The clerk of works was a Mr Wornell, and the general contractors were Messrs M. J. Gleeson Ltd. The tower was placed at the liturgical east end, partly because of the views from a public park to the south. 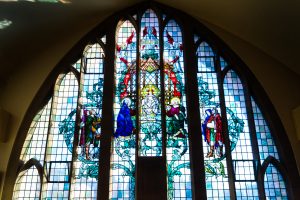 In 1948-49 stained glass windows by John Trinick were added. Further windows by Hardman Studios, who had designed the east and west windows of 1938, were added in 1946, 1965, 1969 and 1971. In 1975 the architects Francis Weal & Partners built a new parish hall opposite the church, replacing an old prefabricated hall. They also converted the adjoining house, 11 Village Way, to provide a first floor caretaker’s flat, and two downstairs committee rooms with kitchen.

In the 1970s the altar was moved forward, the canopy and the altar rails removed, and the tabernacle stand moved to the southeast chapel. At some point before 1988, the font was moved to the sanctuary and the former baptistery at the southwest corner  was  converted  into  a  library.  In  1988,  the  year  of  the  church’s  50th anniversary,  it  was planned  to  replace  the  organ  with  a  redundant  one  from  an Anglican church in the Diocese of Bristol. At the same time, the roof and floor of the hall were renewed.

A number of alterations were made for the Millennium during a reordering around 2000. The former draught lobby at the west was turned into a full-width narthex. A door at the northwest of the nave was blocked and turned into an accessible toilet. Several partitions were inserted and doors removed, converting the northeast chapel into a storage space and a cupboard for the sound system. The former toilets in the sacristy were converted to a safe. An etched glass screen was inserted around the tabernacle in the arch to the southeast chapel, with a matching glass door beside it. A small parish office was inserted in the space between church and presbytery. 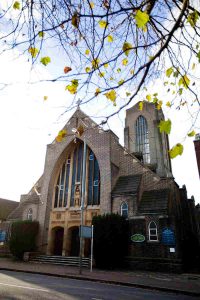 The church was built in 1937-38 from designs by the architect James O’Hanlon Hughes, who also designed all the furnishings and fittings. The church is built on reinforced  concrete  foundations.  The  materials  are  brown  Dutch  bricks,  laid  in English bond, with dressings in Clipsham stone. The roof is tiled. Internally, the walls were constructed from sand-lime bricks up to a height of 7 feet. The roof of steel trusses is clad in a ceiling of fibrous plaster panels. The tall pitched nave roof has three dormer bays on each side. The tower stands at the east end, featuring a pyramidal roof, gables, and a large pointed window on each side.

The plan is roughly rectangular, with a wide three-bay nave with passage aisles.  The west facade’s central section has a large arch below the gable with gable cross. The arch contains the nine-light west window, above three doorways. Three panels above the doors depict (from left to right) the Papal arms, St Edmund with his arms of three suns, and the arms of Bishop Amigo. Together with the sculpture of the Virgin Mary and Child above, these were carved by Philip Lindsey Clark. Above the narthex and projecting into the nave is a gallery, with access to the service galleries. The large west window depicts the Nativity (1938, designed by Patrick A. Feeny, Hardman Studios).

At the west end of the north aisle stands a large modern, unpainted statue of the Sacred Heart. The first window from the west depicts the Virgin and St Bernadette, commemorating the ordination of Kevin Jean-Marie Donovan (1965, Hardman Studios). The next window depicts the Good Samaritan, in memory of Francis Pratt (1971, Hardman Studios). The easternmost window in the north aisle shows Melchizedech (1948, John Trinick). On the north side of the nave stands a statue of St Anthony. The north aisle’s east end has a shallow niche with large 1920s statues of the Virgin (in memory of David Crosby Lockwood, d. 1922), and St Joseph (in memory of Edgar James Paine, d.1929). Beside the niche is a gated corridor leading to the sacristies, and the rooms occupying the site of the former chapel. The Portland stone font (designed by the architect) stands on the lowest sanctuary step, just in front of the foundation stone in the pillar between the corridor and the sanctuary (the 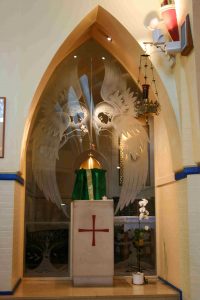 original position of the pulpit, since removed).

The sanctuary is top lit by a skylight halfway up the tower. On either side are two pointed arches, with five clerestory windows on each side. The east side has three further pointed blind openings, just below the skylight. Below is a large recessed pointed arch, with a single lancet window depicting the Resurrection (1938, designed by Patrick A. Feeny, Hardman Studios).  The  north wall has a Byzantine-style mosaic of Christ, with a more recent mosaic opposite showing a cross and the Host.

To the right of the sanctuary is the Lady Chapel. The tabernacle stand of Portland stone (designed by the architect) stands in the inner arch, surrounded by etched glass screens, depicting two angels with vine and wheat. The outer arch has an etched glass door with an inscription listing the names of eight parishioners who were ordained as priests. The east end has a mosaic of the Virgin Mary (in memory of Florence Liffen, d.1963), similar in style to the mosaic of Christ in the sanctuary. Flight into Egypt (1946, Hardman Studios), given in memory of Felix Vernon Feehy and his wife Maria Germaine. The next window shows St Edmund of Canterbury (1949, John Trinick). The subject of the westernmost window  is  Christ  carrying  the  Cross  (Hardman  Studios),  in  commemoration  of Patrick John Byrne, parish priest 1934-60, who died in 1969. The original arch at the west end of the south aisle leading to the former baptistery has been blocked off. A stone war memorial plaque hangs on the partition, below a wooden crucifix. On the south side of the nave are statues of St Theresa and St Jude, set against the nave pillars.