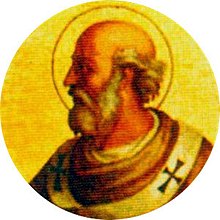 Now that Holy Week and Easter week are over we can start celebrating saints’ days again. In the season of Eastertide the feast days of martyrs are particularly important (and liturgical texts are different for these days from the rest of the year) as these men and women are seen as participating in a special way in the Lord’s death and resurrection. Pope Martin I, whom the Church honours today, was pope in the seventh century: he was arrested on the orders of the Emperor on Constantinople, taken there as a prisoner and left to die in sickness and starvation in the Crimea. He was the last pope (so far) to be venerated as a martyr.

He fell out with the Emperor and the Byzantine court because of his opposition to a heresy which claimed that Jesus only had a ‘divine will’, denying the true humanity of Our Lord. As so often rich elites were threatened by the doctrine of the Incarnation. The Church has always needed leaders like Martin (who is sometimes called ‘Martin the Confessor’) who have the courage to stand up to and challenge emperors and rulers, rather than grovel to them. Another thing the feast day teaches us is the importance of the Holy See as a safeguard for true beliefs – the bishops of the Eastern Empire had largely given in to the emperor – at a time when we owe so much to the ministry of St Martin’s https://www.facebook.com/St-Edmunds-Church-Beckenham-773012899462302/successor Pope Francis. I dare say some of those most threatened by the Holy Father’s teaching ministry would happily have him imprisoned in the Crimea.