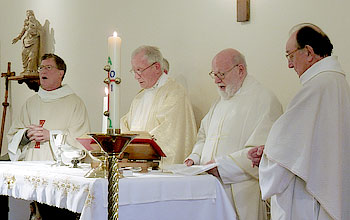 Father George is shown here on the right

Some of you may remember Father George Webster SSC who was for some years Parish Priest of St Patrick’s, Chislehurst. He was retired and living in a community of his congregation and we heard the news earlier today that he died peacefully yesterday.

Fr George was good at supporting events in the local deanery and once came to a talk we had here about St Oscar Romero (many years before his canonisation). In the discussion after my talk he revealed something very chilling. At the time of the martyrdom, in March 1980, George had been working in Bogota in Columbia. He said that on the day it happened he was told that in a private Convent school elsewhere in the city, after the news of the shooting had broke, the schoolgirls had been instructed by the sisters teaching in the school to cheer and applaud the news that the archbishop had been shot.
In the film ‘Romero’, starring Raul Julia, one of things which is captured most vividly is the raw hatred towards Romero shown by right wing 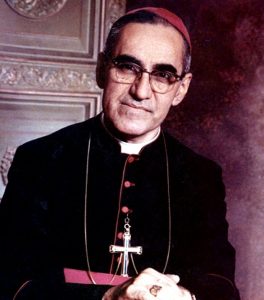 Catholics associated with the rich elite in El Salvador. It is tragic that these appalling attitudes were also found elsewhere in Latin America, and in a school run by a religious order. May Father George rest in peace! St Oscar Romero, pray for him!