St Aidan and the saints of Lindisfarne

St Aidan and the saints of Lindisfarne 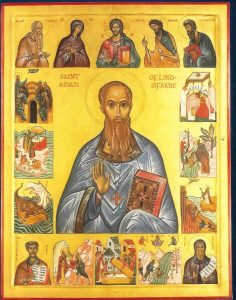 Today the Church in this country honours St Aidan and the saints of Lindisfarne. He was an Irish missionary from Iona in Scotland who evangelised much of northern England in the seventh century, noted for his gentleness. His monastery on the island of Lindisfarne nurtured so many holy men that it became known as ‘Holy Island’, as it still is today, and these saints are honoured with him in the calendar.

At weekday Mass every year we follow a simple system of going through the teaching ministry of Jesus in the first three gospels, in chronological order; so this week we begin the account of that adult ministry of the Lord in the latest of the first three gospels (probably in the 80s AD), the gospel of Luke (4:16-30), which depicts Jesus going to the synagogue in his home town of Nazareth. It’s a fascinating incident, and this account from Luke is often read at ordinations.