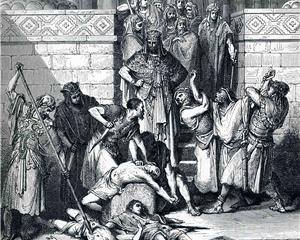 This picture (and I don’t know its origin) is labelled ‘The fear of Zedekiah’. Presumably the king, not long installed as a puppet by the Babylonian potentate Nebuchadnezzar, is frightened because he’s about to have his eyes gouged out, in today’s first reading at Mass (2 Kings 25:1-12), the second stage of the destruction of Jerusalem and the beginning of the Exile. Before the king is blinded he has to see his sons being killed.

While the biblical writers present all this as punishment on the kingdom of Judah, the Babylonian Empire is still a force built on violence and cruelty, like all big empires in the history of the world. Their actions were not unusual – this is what happens when nations are defeated – but it’s still worth a moral evaluation.

Those who rule big empires think they are all-powerful. This means that they feel unconstrained by moral norms. They’re not accountable, they can do what they like. People fear them, with good reason. Of course throughout human history this ‘hubris’ has a price tag: in the end such empires come to a sorry end, and this was no less true of Babylon (you may recall the story of Belshazzar’s feast in the book of Daniel. He was Nebuchadnezzar’s son: his empire is destroyed and he is killed). Just as the treatment meted out to the last king of Judah shows the annihilation of the original empire of David and Solomon, so the people who defeat them in time will be conquered too. This shows us, as we hear and read the Scriptures, how much evil has been brought on humanity by big powerful empires.