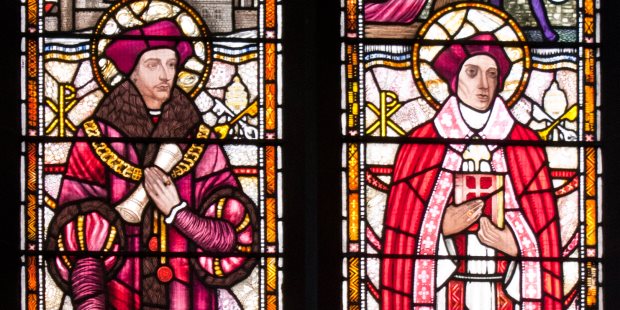 Today is a very special feast day in this country – Saints John Fisher and Thomas More – they weren’t martyred on the same day in 1535 – Fisher was killed on this day and More in early July. They symbolise jointly good and holy leadership of the Church (Fisher was the only bishop to be martyred for standing up to Henry VIII) and integrity in civil public office (More was the only senior statesman to do so). These are qualities we need at this time. The saints are particularly important in our diocese. Fisher’s diocese, Rochester, is now within the Catholic Archdiocese of Southwark and his diocese in the 20s and 30s played a big part in raising money to support the canonisation process in Rome.

What characterised both men was their loyalty to the Holy See and their commitment to the unity of the Church. The King could not make himself Head of the Church of England and have his marriage annulled as he pleased, however powerful and threatening he was. Loyalty to the Holy See is important now – the leadership being given to Catholics by Pope Francis, and his moral message to the world during this pandemic is inspiring to us. It’s also threatening to many who are powerful, in the same way as the Church’s claims were threatening to Henry VIII.

We should also pray today for the many parishes and schools dedicated to More and Fisher in our diocese. 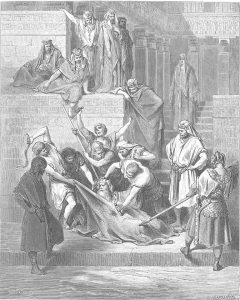 The first reading at Mass for today’s feast of Ss John Fisher and Thomas More is the moving story of the martyrdom of the scribe Eleazar in 2 Maccabees (6:18-31). The books of Maccabees are among the Old Testament books which you won’t find in Protestant Bibles, because they are only in the Greek version of the Old Testament and not the Hebrew. They tell the story of the revolt against the Greek Seleucid kingdom Syria led by Judas Maccabeus in the 2nd century BC. The revolt is in response to efforts of King Antiochus to eradicate the Jewish religion and its laws – so here the officials try to get the old man Eleazar to eat pork. Those who were his friends try to get him to pretend to eat it so as to save his life – and he refuses. This reading is chosen for today because similar efforts were made in 1535 to get St Thomas More in particular to make small concessions to avoid execution. Like Eleazar he refuses and is killed.