In our first reading at Mass today (1 Kings 21:17-29) we hear the aftermath to the killing of Naboth. This picture by the Victorian artist Frederick Leighton shows the prophet encountering King Ahab and Queen Jezebel. God, through the prophet, holds the king and queen accountable for the innocent blood shed, and they and their descendants will be punished (to find out how you have to read the rest of the story in your bibles as this isn’t covered in the selection read at Mass). Leighton captures well the fear of the royal couple.

Shedding innocent blood has always, at least in theory, been an heinous crime in the Judaeo-Christian moral tradition. In the ancient world monarchs were usually seen as semi-divine figures who could basically do what they like (and this is what Jezebel argued to her husband in yesterday’s reading); so the message of the whole prophetic movement in the Hebrew Bible is a real challenge. When rulers and governments are responsible for the shedding of innocent blood, they must be held to account. 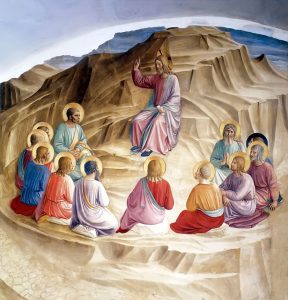 In our gospel reading, which we also hear in Lent each year, we continue the Sermon on the Mount (Matthew 5: 43-48). Like yesterday’s ‘Turn the other cheek’ today’s command of the Lord – ‘Love your enemies and pray for those who persecute you’ should still make us, so to speak, sit up and listen; like yesterday’s injunction, we often don’t take any notice. We can so easily be sucked into the false narrative of hatred around us; and if we see, for example, Christians being persecuted in different parts of the world, we give in to outrage and vicarious self-pity. Jesus presents us with a radically different way of living from the world. The dangers are all too evident in a time of pandemic, when political leaders use the language of conflict and war, and seek to identify enemies, as a way of avoiding scrutiny or criticism.

Today is the optional feast day in this country of St Richard of Chichester – the picture is of the striking statue of him outside the Anglican cathedral in Chichester. However he’s important for this parish because he was a friend and disciple of our patron saint here in Beckenham, St Edmund. 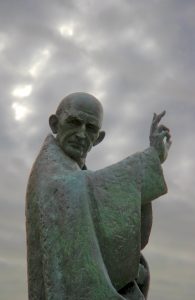 Richard, originally from Droitwich in Worcestershire, studied at Oxford and become Chancellor of the Canterbury diocese under St Edmund Rich. He stood by Edmund in his conflict with King Henry III and accompanied him into exile, being at his death bed in Burgundy in 1242. He was appointed Bishop of Chichester, and his appointment was the centre of a conflict between the king and Pope Innocent IV (which the pope won). He was canonised shortly after his death; the shrine to him in Chichester cathedral was destroyed by Henry VIII at the Reformation, but in the cathedral now there is a chapel dedicated to both Richard and Edmund. HIs life, like that of his mentor Edmund, shows the importance of standing up to the power of the State. Pray today for the diocese of Arundel and Brighton and Bishop Richard Moth, and also for the Anglican diocese of Chichester and Bishop Martin Warner (who was a student with me many years ago).