Saturday Reflections: the end of the Easter season

Saturday Reflections: the end of the Easter season 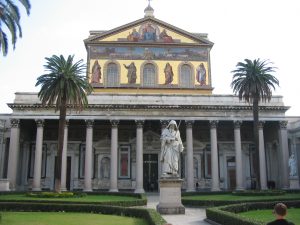 Tomorrow, Whitsunday, is the last day of the Easter season. So this morning at Mass we conclude our weekday Mass cycle of readings from Acts and John, the final verses of each book. The final reading from Acts (28: 16-20, 30-31) shows us a picture of St Paul under what seems to have been a rather gentle house arrest in Rome – so there’s no account of his death. Tradition says that like St Peter he was executed by the Emperor Nero, possibly after the great fire of AD 67: because he was a Roman citizen he was not crucified like Peter, beheaded. The traditional site of his execution and burial is the basilica of St Paul outside the walls, shown here, a Roman church historically associated with England which is often used nowadays for ecumenical services. 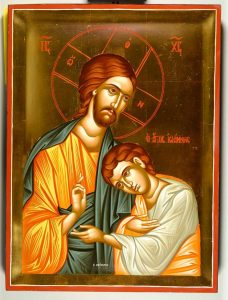 The end of John’s gospel (21: 20-25), about which I have also reproduced a reflection from ‘Independent Catholic News‘ (an excellent site) focusses on the figure only referred to in text as ‘the beloved disciple’ or ‘the disciple Jesus loved’, shown here with the Lord in an icon. He is a major eyewitness source for the gospel, and sometimes identified with the disciple John, the brother of James. As I have indicated before one of the great things about the long Easter season is the opportunity to immerse ourselves day by day in the fourth gospel, and its unique perspective of how the risen Christ inspired the earliest Christian communities.