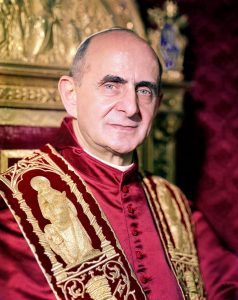 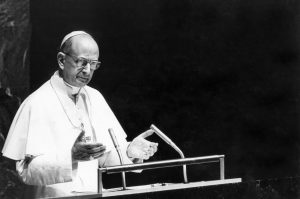 In the calendar of the Church today is the feast day of Pope St Paul VI, pope from 1963 to 1978. Normally a feast day is the anniversary of a saint’s death: Pope Paul died on the feast of the Transfiguration (6 August) and after his canonisation his feast was set for today as it was when he was ordained priest – exactly 100 years ago today.

He guided the Church through the second part of the Second Vatican Council and the years that followed, renewing many aspects of the life of the Church. People often neglect the contribution he made to moral teaching concerning international affairs: the picture on the right shows him addressing the UN, the first pope to do so. In 1967 his encyclical ‘Populorum Progressio’ clearly allied the Catholic Church with the poorest countries of the world and challenged the rich and ‘trickle-down’ economics; it was condemned by the Wall Street Journal as ‘souped up Marxism.’

He was an intriguing character in many ways and people often found him difficult to work out: his predecessor St John XXIII, who was close to him, once famously described him as ‘amletico’, Hamlet-like. 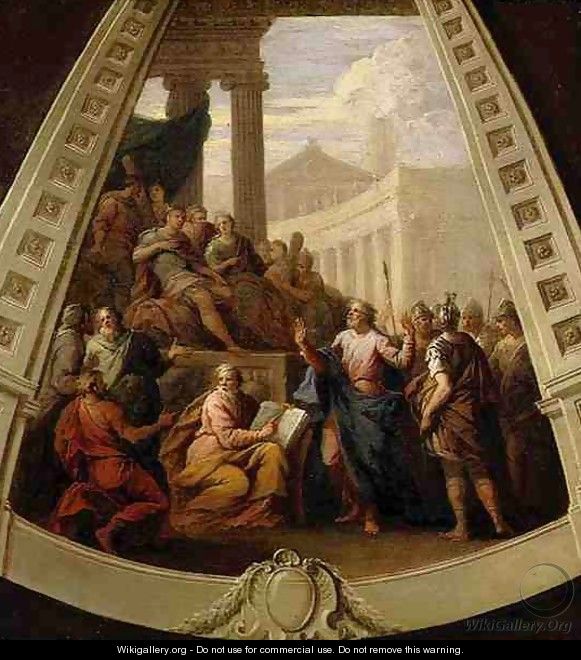 We are in the last few days of the Easter season and this means that we go rather quickly through the final chapters of Acts, missing some things out. This painting by Sir James Thornhill (18th century) shows St Paul in our first reading today (25:13-21) before King Agrippa II (the latest in the inglorious line of Herodian kings). Part of Luke’s purpose in Acts is to stress that in Roman law Paul is not guilty of anything – he’s a victim of hatred. The pomp of the Quisling Jewish monarch is emphasised (captured well in the painting; and yet the king, like the Roman procurators, is clearly fascinated by Paul – they all want to listen to him. This is what we try to do as we read our bibles and encounter Paul in the scriptures at Mass.