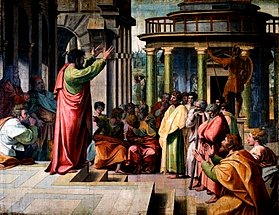 I think I commented a few weeks ago that the long speeches in the book of Acts are amongst the most intriguing parts of the book, possibly from a different source than other material. Of those of St Paul the speech in today’s first reading (17: 15, 22 – 18:1) is probably the most important, in Athens. By the first century AD Athens had long lost its independence as a city state and its status as the cradle of democracy, but some of the ancient city institutions survived in ‘shadow’ form. The Areopagus was a sort of toothless House of Lords or council of Aldermen (some of you may be old enough to remember them), made up of retired magistrates. The speech itself is a masterpiece of what is sometimes called ‘apologetic’ as Paul tries to use what he knows of Athens (and before he got there he probably hadn’t known very much) to show the rationality of the Christian faith, but also with a certain amount of mocking irony in a city which still then considered itself to be the intellectual capital of the Roman Empire. The painting here of the scene is by Raphael.

Christianity has always taught that much of what we can know about God comes from ‘natural reason’, by looking at the created order, as distinct from what is revealed in the Bible and the Church’s teaching, and this episode shows us how important it is. Theology is closely related to philosophy: we argue that the truths of our faith are intellectually coherent and rational. Faith which loses touch with rationality and human knowledge becomes blind fanaticism.

St Paul’s speech to the Areopagus at Mass this morning makes a point which is instructive for us at this time. Speaking of God, Paul says ‘he does not make his home in shrines made by human hands…’ The apostle was challenging the exaggerated importance given to temples and shrines in the ancient world, particularly with regard to the gods of Greece and Rome, many of whom were strongly associated with particular places (as Paul learnt in Ephesus when he was seen as a threat to the local goddess Artemis). Interestingly this was also true at this time (just about) for the Jews in relation to the Temple in Jerusalem. Christianity broke with this narrow view of the presence of God.

At the same time, in a more qualified sense, in the Catholic Church we do believe that God, Our Lady or the saints are associated with particular places, but it’s not the same as the shrines of Pan or Zeus in ancient Greece.

It is about balance. For us churches are important as sacred places set apart for the worship of God. The ways in which we treat our church buildings and decorate them with works of art are important – they speak of the doctrine of the Incarnation, our belief in the goodness of the created order and affirmation of the gifts and talents given to human beings by God, with which we try to glorify him: early on in the lockdown I posted some reflections about this from our good friend and former priest here Ian Knowles (whose talents have resulted in some beautiful and powerful icons, including one in our church).

But at the same time for Christians this is not absolute: and that is why, for all that it pains us that we cannot get to Mass or into our church building here (consecrated to God seventy years ago next weekend) it’s not the end of the world. We can cope, especially as many of us can participate remotely in the Mass. But our God is bigger than buildings, however fine and important, and our faith should be too. This is why in terms of discussions about when our churches should be reopened we should respect the judgement of the bishops and their concern for the safety of people in our buildings during this pandemic: some petitions calling for a hasty and early reopening are really mistaken. Just try and imagine yourself in the Areopagus listening to Paul’s challenging words – they challenge us too at this time. 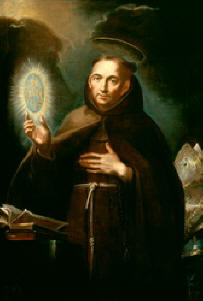 Today the Church honours St Bernadine of Siena, the fifteenth century Franciscan preacher who pioneered devotion to the Holy Name of Jesus. Born not long after the Black Death, we might like to remember at the time of this pandemic that he spent some of his ministry as a young man tending plague victims. He played a big part in reviving Christian spirituality and the moral life in Italy at a time of big social upheaval.

His eloquence and passion as a preacher were legendary. Many of his concerns are timeless – he attacked the lifestyle of the rich and usury, the practice of lending money at interest (drawing on earlier theologians) and he helped set up what were basically pious credit unions.

Some of his preaching from where we are is problematic, particularly his attacks on the Jews. While this reflects predominant Christian culture at the time, it is still lamentable and has left a poisonous legacy. His invectives against luxury were rather extreme – at one sermon of his a lot of high heeled shoes were burnt. He wasn’t exactly a champion of LBGT equal rights.

When the Church puts before us the lives of the saints as models of virtue and holiness it is asking us to see some aspect of those lives as important: it is not saying that the saints led perfect or blameless lives; indeed true saints are always conscious of their sinfulness.

As we honour the saint known in his lifetime as the ‘Apostle of Italy’ we pray for the Franciscan orders and for vocations to the Religious Life; and we pray too for the people and Church in Italy, coming out of some restrictions this week (that is, people can go to Mass in Church, and other things).