“They put fresh heart into the disciples”

“They put fresh heart into the disciples” 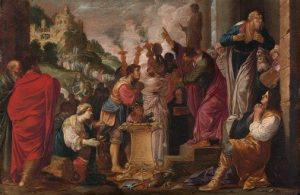 In today’s first reading from Acts (14:19-28) Luke concludes his narrative of the first missionary journey of Paul and Barnabas – we see dramatic contrasts. First we’re told that Paul is almost killed by being stoned, and then (in spite of this) they ‘put fresh heart into the disciples’. We see how dangerous persecution becomes a source of strength for the followers of Jesus. One thing we’re appreciating at the moment, I think, is the extent to which the Holy Father and our bishops are working hard to ‘put fresh heart into the disciples’ at this difficult time; in this country it’s clear that amid widespread confusion from the government they’re carefully planning for our churches to reopen when it is safe.

Also in this passage we see what is the earliest reference in the New Testament to those whom we call priests, when we’re told that ‘they appointed elders’ (they only appear elsewhere in the ‘Pastoral Epistles’ [1 and 2 Timothy, Titus] which are later).

The gospel extract, John 14:27-31, from the account in John of the Last Supper, forms the basis of the prayer we say at Mass normally before the sign 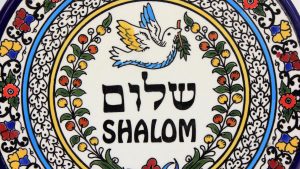 of peace. Of course for a few weeks prior to the cessation of public Masses we had to stop exchanging the sign of peace (although the prayer remained). When Jesus uses the word ‘peace’ here he’s reflecting what it means in the scriptures of the Jewish people: much more than what we mean by peace, it is a gift from God which leads to salvation, the Hebrew word ‘shalom’. This gift from God reconciles humanity to him in the person of Jesus himself; but we share that gift with each other, hence our greeting to each other at this point of the Mass in ordinary times, just before we show our unity with each other by receiving Holy Communion.