The Martyrs of England and Wales

The Martyrs of England and Wales 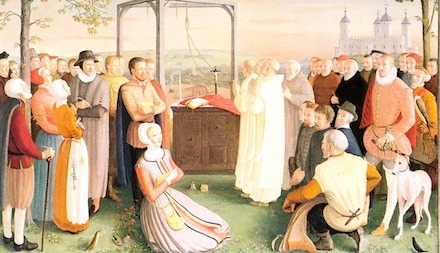 In this country today is kept as the feast of the Martyrs of England and Wales, incorporating two formerly separate feast days (today and in October) for those who had been canonised (forty) and those beatified respectively. They include St Margaret Clitheroe (shown here), although she and some others also have separate feast days marking the dates of their martyrdom, as do St Thomas More and St John Fisher, and the last one included chronologically, St Oliver Plunkett – so it’s those martyred for their Catholic faith between the 1530s under Henry VIII until the closing years of Charles II.

As I remarked on St George’s day the feast days of martyrs in the Easter season are particularly important – the first reading at Mass today repeats the account we heard last week of the stoning of St Stephen.

There’s a special message for us at this strange time. Various things are now making Catholics rather distinctive: as the retired Anglican Bishop Peter Selby pointed out in The Tablet at the weekend, there’s a strange difference in approach at the moment between the Catholic Church and the Church of England about livestreaming services from churches (by and large Anglican clergy have been told to do so from their homes and not go into their churches; Bishop Selby attacks this policy). We can assert that the ways in which our church buildings, sacred and set apart for the sacraments and for the worship of God, are part of the healing we offer to the nation – you don’t have to be a Catholic to watch a Mass online – and to keep Christianity in the public space. This was actually what the martyrs we honour today gave their lives for: the place of historic Catholic Christianity in the life of the peoples of England and Wales.