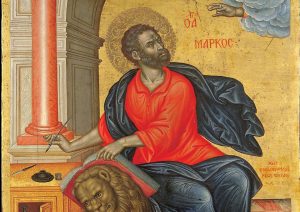 Today is the feast of St Mark the Evangelist – normally in Venice, where his relics are held, this would be a great festival. The author of the earliest and shortest gospel is usually depicted with or by a lion. We don’t know much about his life except that he might have been a companion of St Peter, who would then be his eye witness source. It’s a good day to reflect about some of the characteristics of his gospel.

It is now thought to be the earliest gospel, from the 60s – still later than the letters of St Paul. When people begin studying the Bible at school or university they often start with Mark as it’s by far the shortest gospel (and if you’re studying New Testament Greek it’s also in more basic and unpretentious Greek). Compared to the other gospels there’s less teaching material from Jesus, and far more emphasis on healing miracles and exorcisms: the gospel is set against a backdrop of a cosmic battle between good and evil fought through the ministry of Jesus.

Another feature of Mark is that the disciples of Jesus are often portrayed as pretty useless. They often get things wrong, they often don’t understand 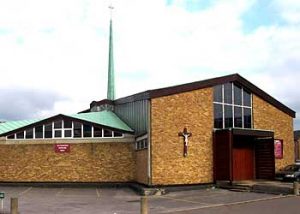 him, and he gets exasperated with them: it looks as if the later gospels which use Mark as a source water down this negative picture. We should perhaps find hope in this: if these close friends of the Lord can be so inadequate, there’s hope for all of us.

So perhaps today pick up your Bible and read through the gospel of Mark. Also today we pray for our neighbouring parish of West Wickham, under St Mark’s patronage, for Fr Ray Brennan and his people.