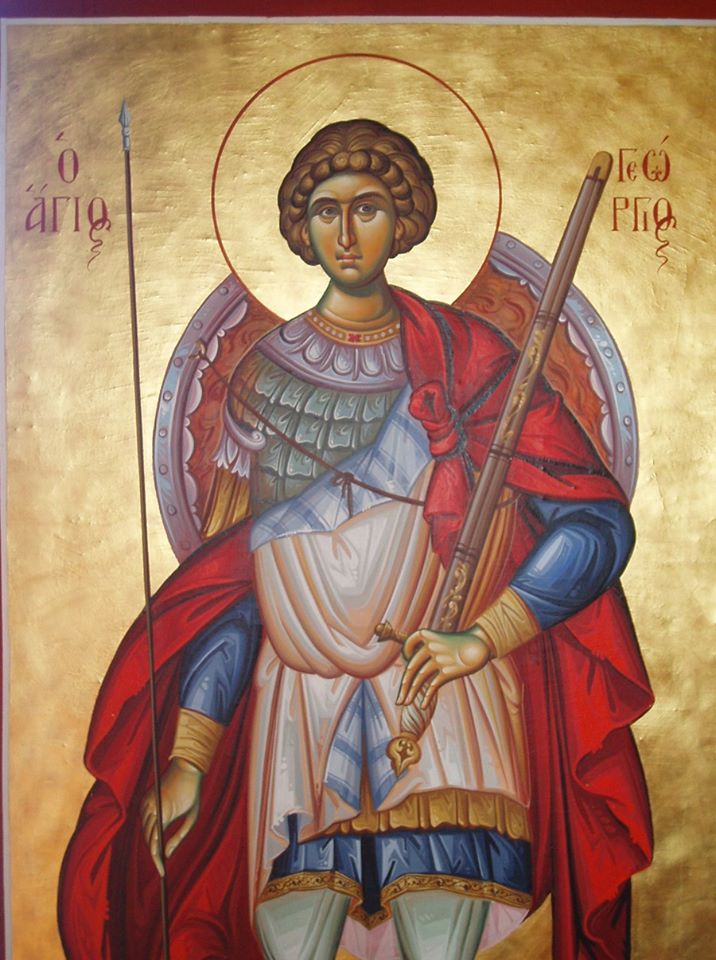 Today is the Solemnity of St George, Patron Saint and Protector of England. One good thing about the current crisis is that we’re spared some of the tabloid flag-waving which has become popular today, divorced from the Christian importance of this feast day and of this saint.

The Catholic Church chooses as patron saints men and women in heaven who are asked to intercede for a particular place or group. They help us with their prayers, but also give us an example by their lives, deaths and teachings. Patron saints also give a place or a group cohesion, based on faith in Christ. St George, thought to have been a Roman soldier (possibly of Greek background) martyred in the third century,in Palestine, became quickly a popular saint in the Holy Land, Greece, the country in the Caucasus named after him – Georgia – and eventually Russia, and this still the case today. In the early Middle Ages,during that ignominious chapter in Christian (and European and English) history known as the Crusades, soldiers from this country encountered his cult and adopted him as their patron saint; and he rapidly became popular back in England. Although it’s quite likely that he was martyred both for being a Christian and refusing to fight in the army as a result, unfortunately devotion to him was used to glorify militarism, bolstered by the legend of him killing a dragon which further removed him from authentic history.

One thing we often forget about St George is that devotion to him historically has been a distinctively Catholic ‘thing.’ This is because at the Protestant Reformation, the feast days of saints who do not appear in the Bible were more or less sidelined or removed from the calendar of saints’ days in England; so in fact liturgically his feast day ceased to be observed by most people. For the persecuted Catholic minority in penal times this was not so – in fact technically today was a Holy Day of Obligation (even though, like now, it must have been in many places impossible to get to Mass). Consequently our cathedral in this diocese, originally one of the oldest Catholic churches in London, was dedicated to him. Incidentally the hymn we usually sing today (which I am afraid I can’t find on Youtube) was I think written by the organist at the cathedral in the last century (‘Leader thou on earth no longer’).

Because the feast day is always in Eastertide it’s part of the Easter narrative. The word ‘georgios’ in Greek actually means ‘gardener’, so this recalls the Resurrection account we heard last week when Mary Magdalene thinks Jesus is the gardener. And it’s because this feast falls in Eastertide that many images of Our Lord rising from the tomb (and the image of him on our beautiful Easter frontal in St Edmund’s) show him carrying St George’s flag. 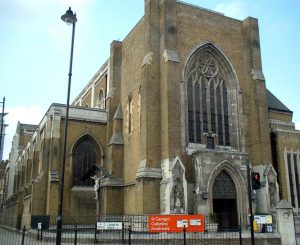 Periods of crisis and emergency often lead people astray into nationalism and suspicion of ‘foreigners’, and we’re seeing a lot of this at the moment. The feast days of national patron saints must never be tarred with this brush, so it’s a day to be watchful.

So today we ask George to pray for the people of England at this difficult time, full of so much suffering and death – also for the people of other countries of which we is patron and for the suffering people of the land where he was killed, Palestine and Israel, where the oppression of the Palestinian people in the West Bank and Gaza has hampered efforts to treat people suffering from Covid-19. Ask him to pray also for our cathedral (which would normally have been supported by a second collection last weekend) and St Thomas’ Hospital which it serves, and for St George’s Anglican Church in Beckenham.