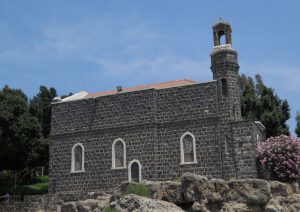 I have only been once to the Holy Land, in 1986 with my late mother, when I was an Anglican transitional deacon. One of the most moving places I remember is the Church of Peter’s Primacy in the town of Tabgha on the Sea of Galilee, shown here. A big rock on the shore extends into the church building. This place is the traditional scene of today’s gospel reading, John 21: 1-14, where the risen Jesus appears to his disciples after they go back to Galilee to resume their life of fishing – the rock is known as the ‘mensa Christi’, ‘table of Christ’ as the traditional place of the fish barbecue which he prepares for his friends. Unlike many holy places in Palestine and Israel Tabgha is quiet and peaceful.

The miraculous catch of fish symbolises the generous love of God which we encounter in the Resurrection – as we rejoice at Easter, even in the midst of a global crisis, we try to use generously the gifts of God in creation to celebrate; though this year we should recall and try to help those who don’t have enough to eat in the midst of this crisis. By the way there has over the years been a lot of reflection about the strange number of fish which were caught (153). No symbolism is evident or convincing; the best explanation is simply that for some reason one of those present actually counted them.