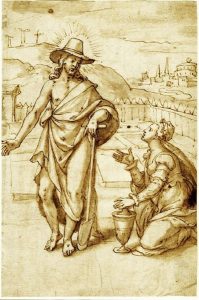 On this Easter Tuesday our gospel reading is always the sequel in John’s gospel (20:11-18) to the Easter morning account of the finding of the empty tomb by Mary of Magdala and Peter and the ‘beloved disciple.’ Mary encounters Jesus, without initially recognising him and thinking him to be the gardener (this has led to some interesting art – the German woodcut on the left depicts Our Lord wearing a hat and carrying a spade). Jesus’ resurrection appearances usually involve physical contact, to stress the physicality of his rising from the dead; while the text doesn’t tell us Mary touched him it’s clear that she did as Jesus tells her not to ‘cling’ to him, hence the many works of art entitled ‘Noli me tangere’, such as the painting on the right by Raphael. Interestingly, the link between the resurrection and gardening is part of the narrative of next week’s feast of St George, a popular Eastertide saint, as the word ‘George’ in Greek simply means ‘gardener’. 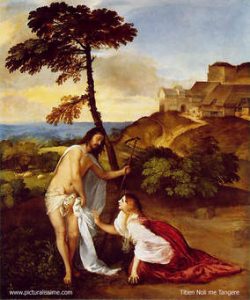 Jesus’ words to Mary help us see the physical appearances after Resurrection as a temporary period which will actually be brought to fulfilment on Ascension Day.

Perhaps ‘Do not cling to me’ has another meaning for us in these strange days. The immense disruption to our normal lives at the moment invites us to reflect about our lives; we’re being invited not to cling on to things which don’t really matter, to focus instead on what’s really important. In the Easter edition of ‘The Tablet’ it was shown that livestreamed Masses since the churches closed have actually led to an increase in weekday Mass engagement. We are doing new things, which are important; when it’s all over we shouldn’t go back to how life was before unthinkingly.