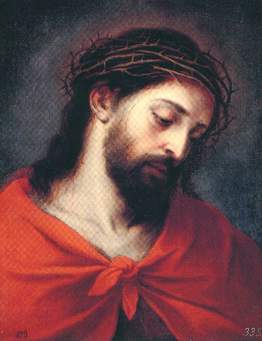 For most of us, unless we go to Mass regularly, we seldom experience the daily prayer of the Church, known as the ‘Daily Office’ or ‘Divine Office’ or ‘Breviary’. This has to be said every day by priests and deacons and most Religious, but laypeople are encouraged to say it too and to join in communal celebrations – and in the ‘Triduum’ this is what we normally do, as there are no morning Masses.

So our celebration of the Office of Readings has just been broadcast through livestreaming. Today we sing one of the great Passiontide hymns, ‘Pange lingua’, ‘Sing my tongue of warfare ended’, in our office books in the beautiful translation by Monsignor Ronnie Knox (not to be confused with the hymn for Blessed Sacrament processions with the same opening Latin words). This ancient text tries to capture how we see the Passion of Our Lord as the culmination of his life; while it expresses sorrow (‘Christ, our Victim, hangs rejected on the cross of Calvary’) the predominant idea is of triumph, of a victory won by the Lord’s death – ;Let the cross, his trophy splendid, be the theme of high renown’. This idea of triumph through the blood of Jesus is the reason why the liturgical colour for Good Friday is now red, not black as in the past.

The psalms today – 2, 22 (21) and 38 (37) sum up the mood, particularly the second one ‘My God, my God, why have you forsaken me?’ as Jesus cries these words out from the cross; psalm 37 expresses powerfully the pain or rejection, physical suffering and isolation. We continue to hear from Hebrews – today from chapter 9, depicting Our Lord as the high priest entering a new sanctuary. The author (and we have no idea who wrote the letter) contrasts Jesus with the high priest in the Temple entering its most sacred space: his one eternal sacrifice on the cross brings to fulfilment the many sacrifices of animals carried out in the Temple over the centuries (and remember, as I indicated yesterday, that when Hebrews was written the place had been razed to the ground and the sacrifices stopped) -‘ Christ offers himself only once to take the faults of many on himself’.

St John Chrysostom is one of the most important early theologians of the Church, Patriarch of Constantinople in the fourth century. A fearless champion of the poor, and one who alienated consistently the rich and powerful who drove him in to exile. There are problems with some things he wrote – such as his passionate denunciations of the Jews, which reflect what so many Christians believed at the time; but our reading today, from his Instruction to Catechumens, focuses on the power of the blood of Christ to wash us and feed us. It’s a personal and passionate reflection. 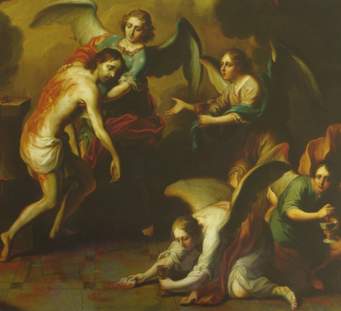 On the morning of Good Friday the Church waits: the Lord has been imprisoned; this morning, around the events of his trial in the gospels, he is whipped (as shown here) and mocked by having a crown of thorns pressed on his head. Christians have often tried to enter the experience of Jesus’ sufferings, as in the second and third sorrowful mysteries of the rosary. Part of what this must have been like for him is a sense of isolation, conscious of having been deserted by his friends. As we contemplate the Lord’s sufferings we unite them to the sufferings of people with the Covid-19 virus, experiencing a painful isolation from friends and families; also the victims of torture and cruelty in the world.