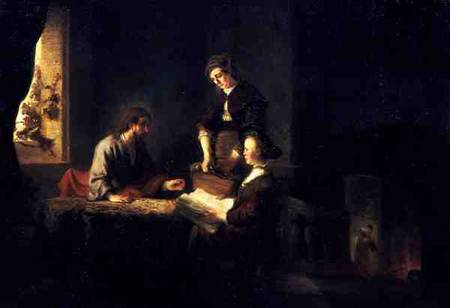 Today is the feast of St Martha, the name day of my older daughter. This painting by Rembrandt depicts her with her sister Mary at their house in Bethany, with Martha serving Jesus, (Luke 10: 38-42). The simplicity of this scene is worth reflecting on (and because of later legends about Martha in the south of France involving a dragon we might often forget the gospel picture) – resentment among family members about the duties of hospitality is common. Interestingly, although Jesus affirms Mary for simply listening to him Martha in a sense has the last laugh (though she doesn’t look like it) in that she is commemorated far more than her sister in the worshipping life of the Church. The alternative gospel for today (John 11:19-27), from the account of the raising of the sisters’ brother Lazarus, depicts Martha eliciting from the Lord the proclamation ‘I am the resurrection and the life.’

It is a mistake to exaggerate the different roles Martha and Mary play. Moreover Martha’s care of Jesus has given her in some times and places the title ‘hospes Domini’, ‘hostess of the Lord’, because she shows the great gift of hospitality to Jesus.

Hospitality – yes, I remember that. For many of us, giving and receiving it seems a distant memory which we are only tentatively and fearfully recovering. But many in the Church and outside have been engaged in hospitality in special ways by giving shelter and food to those who are suffering most in the pandemic, here and all over the world. If we support a charity, or give to a food bank or a shelter, we’re following Martha’s example: this is a personal calling for many followers of Christ, and Pope Francis has repeatedly called on us to do more in this time of suffering. Martha’s example of hospitality also underpins Catholic moral teaching about welcoming migrants, refugees and asylum seekers, which has been central to our response worldwide to Covid-19, so deeply at odds with anti-Christian attitudes among so many in our society.