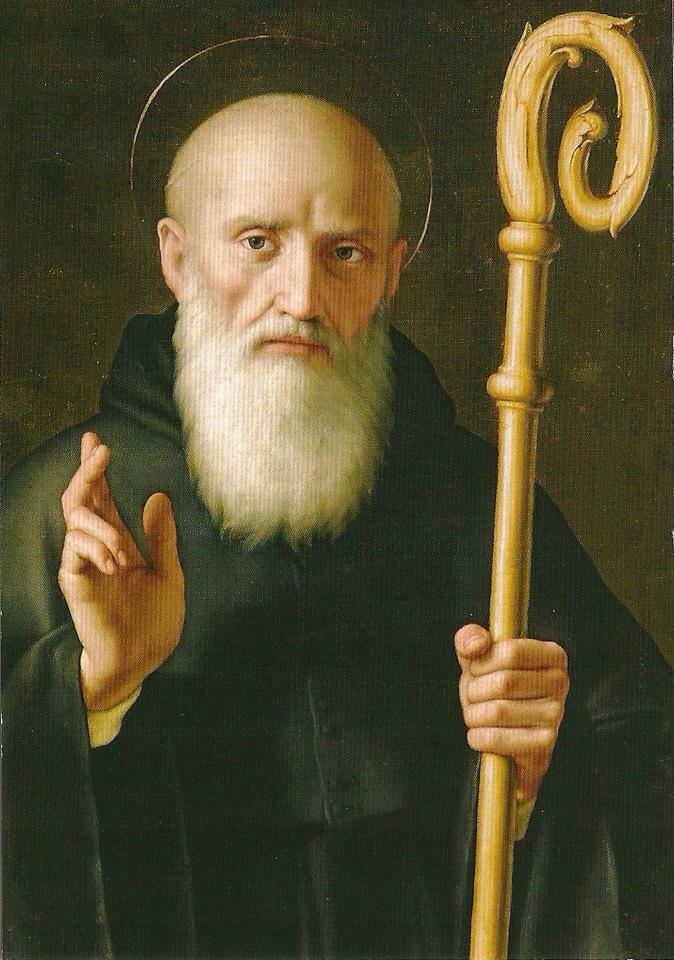 Today is the feast of St Benedict. In our Lady chapel at St Edmund’s we have a small statue of him – unfortunately you can’t access the chapel at

the moment. It was given in memory of Tony Kinch, whom some of you will remember. Tony had for many years been a lawyer working in the European Commission in Brussels. Benedict is one of the six patron saints of Europe – the first to be so named by St Paul VI in 1965 – and Tony was passionately committed to European unity. In addition to an image of Benedict I have put up a copy of the cover of the Catholic Truth Society booklet I wrote some years ago now about Benedict and the other patron saints (it’s out of print; but if anyone wants a pdf do contact me and I can send you one).

Benedict is seen as the father of western monasticism, living in Italy is the fifth and sixth centuries. This was a time of great social upheaval and violence – his communities, based on poverty, chastity and obedience, became beacons of light in Europe in the succeeding centuries. The importance of monasteries in the history of Europe cannot be exaggerated – and of course they were all swept away in this country by King Henry VIII. If you look only at the whole area of scholarship and education you can see the extent of their influence.

The popes have tried to teach us that the patron saints of Europe are put before us to show us the right values for people in Europe to follow. In a monastery, for which Benedict wrote a special rule which still governs Benedictine communities, the monk is always expected to put others first, never self. The monastery is a community, in which people share resources and gifts. The monastery – and this remains very distinctive for Benedictine houses – is a place of hospitality, where strangers and visitors are welcomed. While we’re not all called to the monastic life, these values at the heart of Benedict’s rule are at the heart of Catholic teaching about how Europe should be: unity, sharing of sovereignty, a welcome to refugees and migrants, love for the poor. This is why this feast day is so important, amid so many false messages at odds with what Benedict represents, particularly in our own country.

Please pray today for all the nations of Europe and for vocations to the religious life, particularly in monasteries.

As announced earlier there will be Confessions in our Lady chapel (you might just be able to see St Benedict behind the furniture) from 5pm and 545pm today.