Feast of St Augustine Zhao Rong and 119 others

Feast of St Augustine Zhao Rong and 119 others 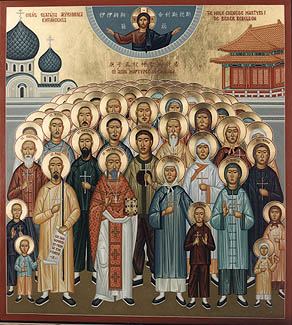 Today the Church honours St Augustine Zhao Rong and 119 other Chinese martyrs, who lost their lives for the Catholic faith between the 18th century and 1930. They were all canonised by St John Paul II twenty years ago.

The eyes of the world are on China, partly because of the beginnings of the Covid-19 virus in Wuhan at the end of last year, and partly because of the critical situation in Hong Kong. On this feast day we should pray for the people of China, Hong Kong and Macao, and for the churches there. The Church’s liturgy, often through the saints’ days in the calendar, enables us to look beyond ourselves to the rest of the world, to appreciate what it means to be part of the worldwide family of the Catholic Church. Governments are often rivals – and the prospect of a ‘trade war’ between China and other countries is truly depressing – but Catholic teaching about solidarity enables us to break down man-made barriers and show love and concern for other peoples. In a society like China it’s more than likely that far more people have suffered from Covid-19 than has been admitted. We should also pray today for people of Chinese heritage living here. Particularly when the virus first came here, there were disturbing accounts of racial abuse directed against them, as if they were somehow responsible.

I will also post the ‘Chinese Christian music’ which I played before the 9am Mass this morning.