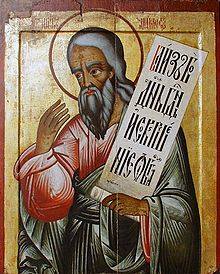 In our Old Testament readings at weekday Mass we have been hearing about the decline of the kingdoms of Judah and Israel, together with the prophetic ministry of Elijah: this reached its climax in the destruction of the city of Jerusalem in the 6th century BC. We now explore more of the background to this through the writings of the prophets, beginning today with the man who was probably the earliest, Amos – shown here in a Syrian or Coptic icon – usually dated now to the 8th century, two hundred years before the destruction of Jerusalem. He was active in the northern kingdom of Israel, and like many prophets rather reluctant.

If you study Old Testament at degree level, study often begins with Amos because it’s the earliest written text. He is characterised, particularly in the early chapters, by an uncompromising proclamation of God’s judgement against the rulers of the kingdom and the rich (the more hopeful bits of the book later on are usually thought to be later). The early chapters are unremitting in their gloom! Being unfaithful through idolatry is shown by injustice – such as selling ‘the righteous for silver and the poor for a pair of sandals’.

In England and Wales we shifted the feast of Ss Peter and Paul to yesterday, as we normally do if a holy day falls on a Monday. In Rome, however, it is being kept today, when the Holy Father blesses the small vestment known as the ‘pallium’ sent to newly appointed metropolitan archbishops. The Mass this morning from St Peters can be seen here: http://www.vatican.va/…/vati…/en/2020/6/29/pietroepaolo.html