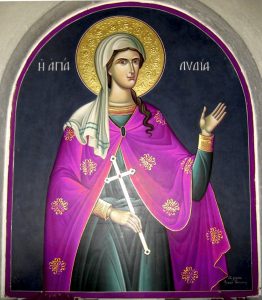 Our first reading today (Acts 16:11-15) introduces us to St Lydia of Thyatira, ‘a devout woman who was in the purple-dye trade.’ She is converted to Christianity and is traditionally seen as the first convert from the continent of Europe (from Macedonia). Devotion to her is particularly strong in the Eastern churches, hence these icons. 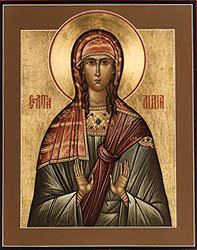 The Catholic Church is engaged in reflection about enhancing the ministry of women in the Church, so Lydia’s role in the missionary journey of Paul, Silas and Timothy here is important. She is portrayed here as an independent and assertive woman – she has ‘social power’ in that she invites a group of foreign men into her house. This is a good day to pray for women in pastoral ministry in the Church and for God’s guidance; also a day to pray for all the peoples of Europe at this challenging time. In Italy churches begin to open for worship today; restrictions are also being lifted in Ireland.

In the calendar of the Church today is the feast of Pope John I. He was pope for a short time at the beginning of the sixth century, and came from Siena. At that time Italy was controlled by the Goths, and they were adherents of what is known as ‘Arianism’ – Arians denied the full divinity of Jesus Christ. Their king had the pope imprisoned (he was elderly and frail) where he died of neglect on this day in 526. He is venerated as a martyr for his faithfulness to true beliefs about the person of Our Lord.

A good day to pray for people who are unjustly imprisoned all over the world.