What it means to be a Convert

St Edmund's RC Church, Beckenham > Sermons > What it means to be a Convert

THIS is the great east window in St George’s Cathedral, the mother church of our diocese of Catholics in South London and Kent. Later this month it will be the place of the installation of our new archbishop, John Wilson. However it is on the page because in the cathedral, twenty five years ago last Tuesday, I was received into Full Communion with the Catholic Church by the late Bishop Charles Henderson, auxiliary bishop here for many years. Many thanks to those of you who have sent very kind messages through social media. I want to reflect about it because how we support adult converts to Catholicism is a big part of the life of our parish. I became a Catholic in the cathedral simply because, having been priest-in-charge of an Anglican church until the end of June 1994, I hadn’t started worshipping in a Catholic parish by early July. It was a fairly simple occasion – the ceremony simply took place at an ordinary Saturday lunch-time Mass celebrated by the bishop. My immediate family and friends were entertained to sherry after Mass by Archbishop Bowen.

I think quite a high proportion of you reading this are yourselves converts, perhaps from many years ago. For an adult to decide to become a Catholic is a major step to take; even now (though much less than in the past) it can be costly in terms of sundered relationships. By and large the process generates enthusiasm and commitment, so quite a lot of converts in parishes are to be found in positions of responsibility: on the diaconate programme for which I am responsible it’s usually the case that about a third of the students are converts. The process too is interesting historically: as you may have noticed it has been announced that in October Blessed John Henry Newman is to be canonised: his conversion to Catholicism in 1845 is a major reason for his importance (and the date of it is the date of his feast day every year). Of course there are variations in how people prepare to become Catholics and how they are received: while the group process we call the Rite of Christian Initiation of Adults (RCIA) is the ‘default’ setting here and in most parishes, you can be prepared in a different kind of group (as we did in 2011) or individually (as I was).

I am always struck by what is really the highlight of the ceremony, distinct from the conferral of the Sacrament of Confirmation. It is the point in the service when the person about to be received says, individually (and here into a hand-held microphone) these words: ‘I believe and profess all that the holy Catholic Church believes, teaches, and proclaims to be revealed by God.’ You are not asked to say this if you’re being baptised; nor do we ask this of ‘cradle’ Catholics unless they enter ordained ministry or (depending on the order) the religious life. In some ways it must be daunting, but in some ways I feel it should be accompanied by a drum roll to emphasise its importance. In any programme of preparation, a lot of work goes into helping those wishing to become Catholics simply to know what the Catholic Church believes, teaches and proclaims to be revealed by God. This is about honesty and transparency: no one is forced to become a Catholic these days, and you shouldn’t be expected to say you believe something if you don’t know what you’re committing yourselves to. I think there are two really important aspects of the statement you’re expected to make.

The first is the little word ‘all’. Catholic Christianity is not ‘pick ‘n’ mix’. RCIA programmes are substantial because we try and cover everything which the Church teaches – but you do sign up to all of it. Unfortunately in relation to moral teaching, including that branch of it which we call Catholic Social Teaching, some people think that there are some bits which you can simply ignore if you don’t like them. What we call the ‘ordinary teaching of the Magisterium’ (the word which describes the pope and the bishops teaching together) is binding on all Catholics; you’re not free to dissent. In our programmes we try to talk through what this means; but it will mean that sometimes a person may decide that he or she is not able to become a Catholic.

The second thing is the phrase ‘revealed by God.’ A characteristic of mainstream Christianity is the assertion that God communicates with us, that he has revealed something about his own nature, and also that he has revealed something to us about how we should live. We are not put on this planet as people wandering around in the dark – we’re given moral guidance because we need it. Christian teaching about revelation claims God reveals himself to us through the Scriptures and through the life and teachings of the Church.

As we think about conversion pray for those who may be considering becoming Catholics, and for our dedicated RCIA team. And thank you too for the support and kindness I have had over the last twenty-five years, most of them here at St Edmund’s.

A Journey in Faith – RCIA 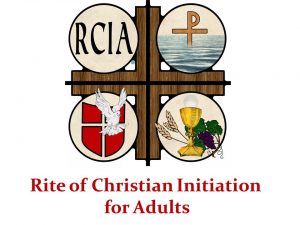 The Rite of Christian Initiation of Adults (RCIA) is starting a new course in September for those who are interested in becoming a Catholic or would like more information about the Catholic Faith. This also includes adults (over 18) who were baptised as Catholic, have little if any knowledge of Catholicism and who are maybe considering being confirmed. If you would like more details of the course please contact us by email or phone Mary Deering on 0208 650 9650 or Cathy Denne on 07956914164.