THIS SUNDAY, the feast of the Baptism of the Lord, marks the end of the Christmas season in our calendar, although like many other churches we keep the crib in place, this year in front of the altar, until the feast of Candlemas at the beginning of next month. This might seem strange at first sight: in the space of a few days we shift rapidly from the Magi coming to Jesus on the feast of the Epiphany last Wednesday to Jesus as a grown man, being baptised by his cousin John the Baptist in the river Jordan. As it happens the feast is fairly recent – formerly the feast of the Epiphany, in the Mass texts used, marked the event of the Lord’s baptism together with the coming of the Magi. Both feasts now are about Jesus being revealed in his glory as the Son of God: the beginning of Jesus’ adult ministry completes the process of his revelation begun at the Epiphany. 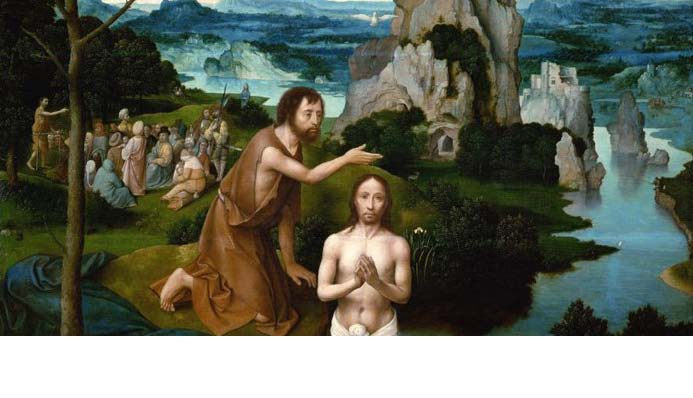 A good day for baptisms, then, though not so easy this year for obvious reasons. Normally today the Holy Father baptises a number of babies at Mass in the Sistine Chapel (at the time of writing I don’t whether it’s happening this year, but I suspect not). The quick move to Our Lord’s adulthood takes us into the narrative of his teaching and proclaiming God’s kingdom which we encounter in the liturgy and scripture readings at Mass from now on.

The event we celebrate is rich in meaning. Normally we see baptism as something which cleanses us from Original and actual sin; as Jesus was sinless he didn’t need it; in fact the theological meaning is a reversal of this. Instead of being cleansed in water, the sinless God incarnate sanctifies the element of water in which he is baptised; it is a triumphant act, and has at times in Christian history been portrayed as a joyful dance. The Word made flesh glories in the water, the element made by God which all living creatures need for survival. That is why one of the many ceremonies carried out at this time is the blessing of waters – such as the Eastern Orthodox ceremony in which a cross is thrown into the sea and retrieved by swimmers. The material world, the created world, is made holy and sacred by God. The event of the Lord’s baptism is dramatic, recalling the creation of the world.

Pope Francis in his prophetic teaching ministry during this terrible pandemic has often linked the rampant progress of the Covid-19 virus to our abuse of creation. Viruses shift between species because of the violence we do to the ecology of the world God has created; the pandemic is not only a ‘wake-up call’ in relation to poverty and inequality in the world, but also how we treat the world itself. In his landmark 2015 encyclical on creation, Laudato Si’, the Holy Father stresses how water is central to the created order; at one point he quotes the great hymn of St Francis of Assisi: ‘Praised be you, My Lord, through Sister Water, who is very useful and humble and chaste’ – and throughout the letter he points to how access to decent drinking water has to be seen as a basic human right; also those of us who may not think we’re short of water need to learn not to waste it. Water, like the rest of creation, is not a tool for humanity to abuse and exploit; rather it is gift from God, intended by him to sustain all living creatures.

When we use holy water in church – and we’re not doing so very much at the moment – we remind ourselves of our baptism, which links us to the baptism of Jesus which we celebrate today; we affirm our identity as missionary disciples of Jesus, baptised in the name of the Holy Trinity. It also reminds us of the sacredness of water itself, made so by God’s creating act and by the Lord’s baptism in the Jordan: so we treat water with respect. Final words from the pope towards the end of Laudato Si’:

‘Water poured over the body of a child in Baptism is a sign of new life. Encountering God does not mean fleeing from this world or turning our back on nature. This is especially clear in the spirituality of the Christian East. “Beauty, which in the East is one of the best loved names expressing the divine harmony and the model of humanity transfigured, appears every-where: in the shape of a church, in the sounds, in the colours, in the lights, in the scents”. For Christians, all the creatures of the material universe find their true meaning in the incarnate Word, for the Son of God has incorporated in his person part of the material world, planting in it a seed of definitive transformation’.