The Scourge of Secularism 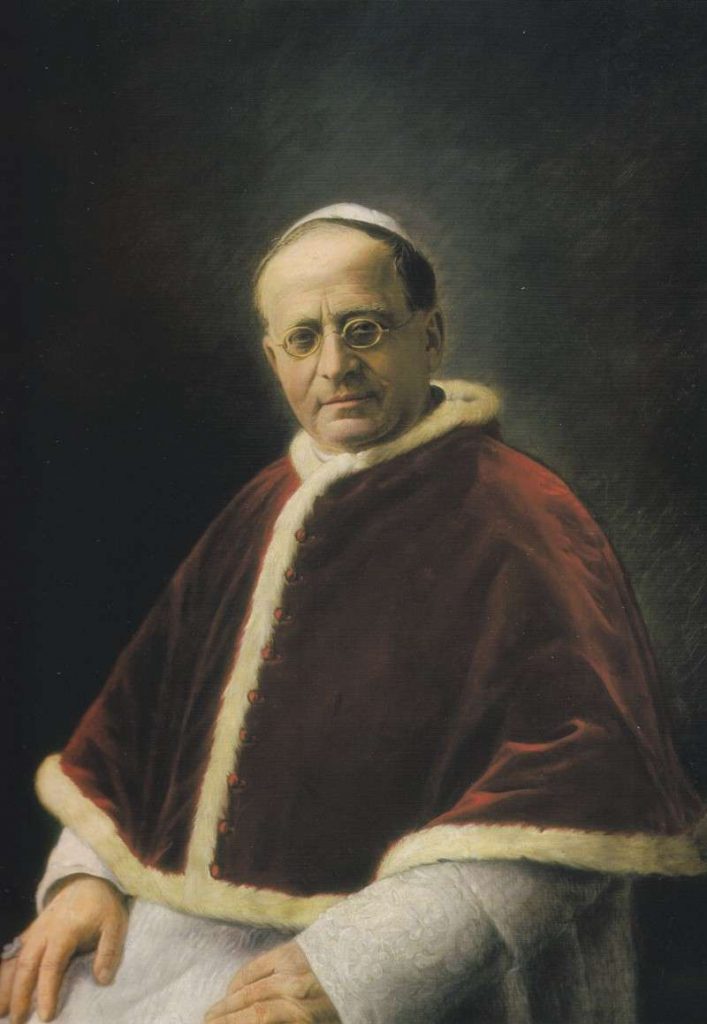 Pius XI, shown here, was pope from 1922 until 1939. He’s unusual for a number of reasons; before being made a Vatican diplomat during the Great War Achille Ratti had spent most of his priestly ministry as a librarian and archivist in Milan and Rome. Such folk are not to be messed with and he was a strong and vigorous personality. He became pope after the unexpected death in early 1922 of Benedict XV, just before Benito Mussolini’s fraudulent ‘March on Rome’ which brought the Fascists to power in Italy; and much of his ministry as pope was taken up with the challenges arising from this, alongside those of Soviet Russia and, after 1933, Nazi Germany.

Fairly early on in his time as pope he did some-thing which has had long term implications: he set up a new feast day for the Universal Church – Christ the King, which we celebrate this Sunday. It was originally set for the last Sunday of October, but when the missal was revised in 1970 it was moved to the last Sunday before Advent, fitting in with the theme of the ‘end times’ and the coming of God’s kingdom which mark the Scripture readings we hear at Mass in these last weeks of the Church’s year. Devotion to Christ the King became important all over the Catholic world in the years after 1925, so in churches built in the 20’s and 30’s you often find windows depicting Our Lord as a king, with crown, robes, orb etc., such as in our own church (the east window) and at St Joseph’s, Bromley.

To understand why the pope did it you have to think about the history of those times. The world was still reeling from the First World War – terrible loss of life, the collapse of so many institutions and shared attitudes. The devastation and the effects of the Russian Revolution, together with the collapse of some currencies and real instability, made Europe in particular a very unstable place. While many of the rapid changes were exciting and liberating for many, others felt unsettled. For Pius XI the problem is very simple: the world has turned away from God. He sets up the new feast day to reiterate that Jesus Christ is King and sovereign not only of our lives as individual Christians, but of all human societies. It is a counterblast against what he calls the ‘scourge of secularism’. This took many forms – the open persecution of Christians in Soviet Russia and Mexico in the 20’s, and subsequently more covert in Fascist Italy itself and Nazi Germany, are the most glaring examples. If religion is a threat then it should be eradicated. But the pope was also aware of how religion was increasingly marginalised in developed  societies in Europe and North America. Legislation (in relation to areas like divorce), the running of economies, modern warfare, the exclusion of the Church in many places from education – these are just some examples. A common thread, which becomes more and more obvious, is the growing power of the centralised State. One of the things which Soviet Russia, Fascist Italy, Nazi Germany and other states have in common is an over-weaning State, determined to dominate every aspect of people’s lives, demanding total commitment from citizens, oaths of allegiance, the personality cult of its ruler, unquestioning obedience, trampling on freedom of speech, conscience and association; everything must be under the State’s power. Throughout his pontificate the librarian-pope would protest against these things: by contrast he taught that in any society things should be run at the lowest level, the level closest to the people, the doctrine we call subsidiarity.

The problem of secularism is in many ways far more serious than it was in 1925. Alarmed as Pope Pius was, things are far worse than he would have predicted. The feast of Christ the King compels all of us to ask some very basic questions: is Jesus Christ really the king or centre of our lives? If we’re honest, what part does our religious faith play in our daily lives? Do we, perhaps unwittingly, collude with those who want to push religion out of life? The last question is perhaps particularly challenging during a General Election campaign. Whenever during such a campaign bishops issue guidance for voters on the basis of Catholic moral teaching, or indeed when-ever they or other Catholics in pastoral or leadership roles react to particular political or social issues the cry goes up, often from people who should know better, ‘The Church shouldn’t interfere in politics.’ If we ever go along with this, deep down we’re succumbing to the plague of which Pius wrote over ninety years ago; we’re allowing God, and religious faith, to be pushed aside; we’re saying that there are whole areas of our lives which are not part of God’s realm or subject to him. As Archbishop Tutu in South Africa once said, many years ago, ‘If these things are not God’s, then whose are they?’