The Month of Purgatory 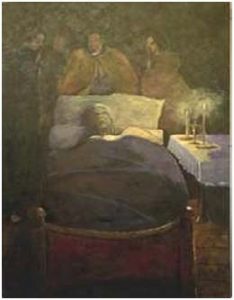 This picture (and I can’t remember who the artist was) is a representation of the peaceful death of the old man in St John Henry Newman’s poem The Dream of Gerontius, beautifully set to music by Edward Elgar. The man’s friends and relatives are around his bedside, praying for him with the priest; a great climax in the music is the priest’s command, still used often at a dying person’s bedside:

Go forth upon thy journey, Christian soul! Go from this world!

As the Church is still celebrating Newman’s canonisation last month we’re enabled to be taught by him particularly in this month of the Holy Souls. This is because the poem is a powerful portrayal of the Christian’s soul being initially judged by God and then beginning the process of purification which the Church calls Purgatory. In November we pray for our loved ones in Purgatory, because we believe that their souls are helped by our prayers and our offering of the sacrifice of the Mass. Amidst some very odd messages this month (particularly this weekend) it is important for us to cherish this belief and gain strength from it. We pray for the dead for a reason – to help them. It is an act of love, of solidarity. So often in funerals or memorial services outside the Catholic Church this element of categorical prayer for the departed person is absent. In this country, because the Protestant reformers rejected belief in Purgatory praying for the dead was very unusual for many years; curiously this began to change a century ago because of the extent of casualties in the First World War, among the millions whom we remember in particular this weekend.

Belief in Purgatory is based on what we believe about God’s justice. Most of us, when we die, even as professed and practising Catholics, are still in a mess in God’s sight, even if we’ve had our sins absolved in confession. The purification we need after we die prepares us for eternal life in heaven with God. Newman, towards the end of his poem, gives us these words of the old man’s soul preparing for what he will undergo:

Take me away, and in the lowest deep there let me be,
And there in hope the lone night-watches keep, told out for me.
There, motionless and happy in my pain, lone, not forlorn, –
There will I sing my sad perpetual strain, until the morn.
There will I sing, and soothe my stricken breast, which ne’er can cease
To throb, and pine, and languish, till possest of its Sole Peace.
There will I sing my absent Lord and Love:- take me away,
That sooner I may rise, and go above, and see Him in the truth of everlasting day. 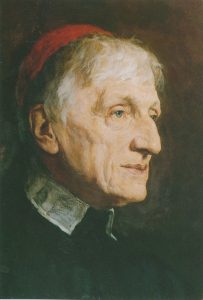 It is this sense of yearning, the soul’s thirst for God, which defines what we believe about Purgatory. This yearning, and our need for purification, helps us take seriously the reality of sin in our lives, the brokenness which characterises our life on earth in so many ways. When this is absent the ways in which death is marked can easily become sentimental and divorced from reality. The person we mourn simply becomes a saint straightaway: sin, as so often, is pushed out of the way. It is because engaging in prayer for the departed person is so important to us that the way in which we celebrate funerals is in many ways a mark of a good parish. We take funerals here seriously – not just the clergy but lots of people in the parish who are involved – for a serious reason. It is part of what the Catholic Church does for her children.

There are other reasons why belief in Purgatory is important. For example, we live in a culture dominated by individualism. For many people death can be a very lonely and solitary experience; this is perhaps what is so frightening about it. But the Church tries to overcome that, encouraging loved ones to be present at a death, as at the beginning of Newman’s poem; and in our prayers for the Holy Souls we’re proclaiming that we’re all still part of the Church in spite of the barrier of physical death; as the angel signs at the end of The Dream:

Angels, to whom the willing task is given, shall tend, and nurse, and lull thee, as thou liest;
And Masses on the earth, and prayers in heaven, shall aid thee at the Throne of the Most Highest.

As we pray for the Holy Souls this month, and this weekend for the victims of the sinfulness of war, let us be inspired and helped by the vision of St John Henry Newman.