The Language of the Heart 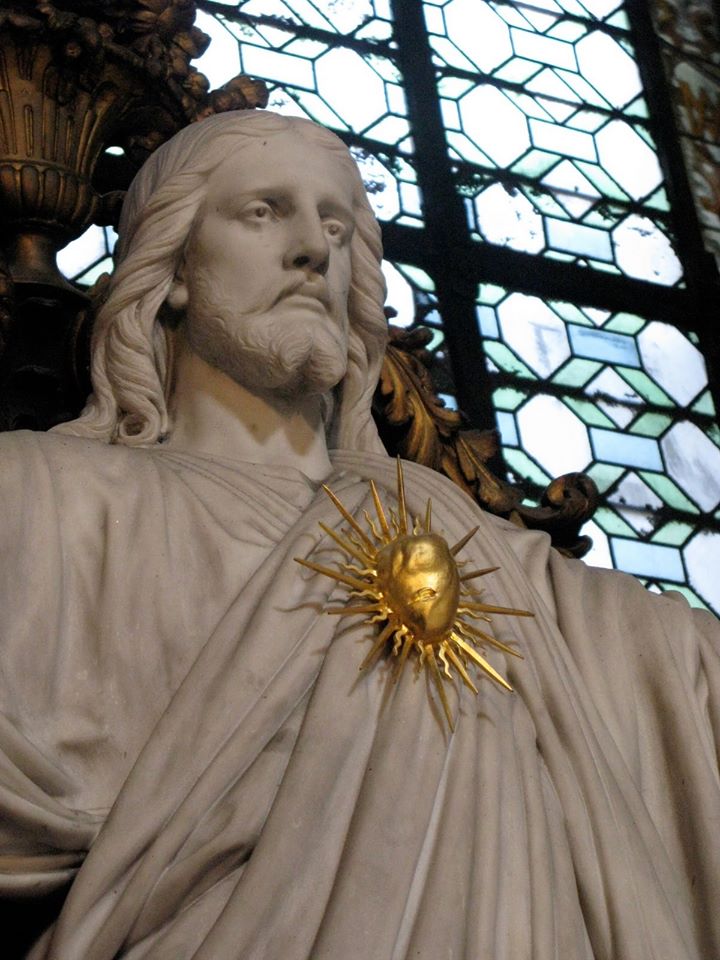 Friday was the feast of the Sacred Heart of Jesus – the statue shown here is in St Sulpice in Paris. While it’s an important feast throughout the Church it’s particularly important here because of the ministry in our parish for many years of the Handmaids of the Sacred Heart (or as they are known in Spanish, esclavas, ‘slaves’ of the Sacred Heart) – which is why the Sacred Heart appears on the school uniform and badge of our parish primary school. I some-times think that in spite of the popularity of devotion to the Sacred Heart, we often ‘sell it short’ and limit what it’s about. So it’s often only about adoration and worship or (and less so these days) acts of reparation or recompense to Jesus for insults offered to him. In fact the history shows that it’s so much richer than we might think.

While devotion to the physical and human heart of Jesus begins in the Middle Ages, alongside devotion to the wounds of Jesus suffered during his Passion, it really becomes important in late 17th century France, and the visions and ministry of St Margaret Mary Alacoque and St John Eudes. The visions we associate with St Margaret Mary took place in the context of a strange religious movement strong in France at the time known as Jansenism. This was seen, fairly or otherwise, to put forward a very harsh, cold and authoritarian picture of God: devotion to the Heart of Jesus, by contrast, stresses God’s compassionate love for humanity. Culturally we see the human heart as the seat of emotions, as a symbol of love (every year on St Valentine’s day, for example), so the Heart of Jesus represents the boundless love she showed for his life on earth and above all in his death on the Cross.

It hasn’t always been popular, mind you. For some worshipping Our Lord’s human heart blurs too much the distinctions between his humanity and divinity; for members of the Church of England, devotion to the Sacred Heart was actually declared to be illegal by the Privy Council as recently as the beginning of the last century. Art associated with the Sacred Heart has not always been what English people sometimes call ‘tasteful’; but to be honest a lot of it is sentimental, tacky and third-rate.

But surely we need the right sort of devotion to the Sacred Heart more than ever. We’re called to reflect the love of God which we see in the Heart of Jesus to all those around us; to reflect and show his Heart. The love which so many people, particularly in ‘front-line’ jobs, have been showing during this pandemic reflects Our Lord’s Heart and his love for suffering humanity. We don’t just adore or worship the Lord’s Heart – if our worship is authentic we have to show the love we see and adore to other people. Where there is coldness and lack of compassion, we’re called simply to point to this widespread symbol of love. In a sense the Sacred Heart is central to all that we teach about justice in the world.

Recognising how much love we’re seeing at the moment, particularly among people we know in the health and care professions, but also in other undervalued jobs like cleaning and public transport, people who speak the true language of the heart, shouldn’t blind us; we have to discern where this is lacking. A lack of heart-filled, heartfelt love is, sadly, not difficult to see in a crisis. We see it, for example, in employers who have penalised workers who have had to be ‘shielded,’ sometimes cutting their pay or threatening their jobs; we see it in the lack of consideration and selfishness of people who don’t attempt to ‘social distance’ in the streets or in shops, because of selfishness and stupidity; such people seem to think it’s all over, which is far from the case; I think we also saw it in those who pressurised the bishops for churches to reopen before it was safe to do so (as it is now) – it is easy for our spirituality to be selfish and ‘me-centred’; there are sadly lots of examples. I am afraid people often don’t behave in a good or loving way. When this happens such conduct does have to be challenged.

Devotion to the Sacred Heart, if it is to be authentic, can never be escapism or a means to run away from the world and its problems. When we sing in the lovely traditional hymn ‘O Sacred Heart, our home lies deep in thee!’ we mustn’t think of the Lord’s Heart as a home for us to hide in. We leave our homes to show his love to the world, particularly when there is coldness, fear and suspicion. The love we see in the Lord’s Heart is a treasure to be shared, not wrapped up and kept to ourselves. Let’s pray this weekend that, like so much else, our devotion to the Heart of Jesus can be renewed at this time.