The Holy Trinity and the sin of racism 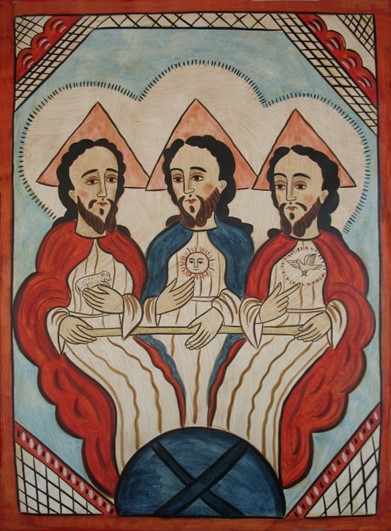 A FEW YEARS AGO I was listening to the writer Malorie Blackman on Radio 4’s Desert Island Discs. She recounted that when she was a child her family moved to Beckenham, but that when they were being shown round a house by an estate agent a neighbour rang the police, thinking the house was being burgled. This was because they were a black family. I don’t know off hand how long ago this was but it does show the reality of racism in areas like Beckenham in the past, and what a shameful history this is.

Today is Trinity Sunday, when we celebrate the belief which we hold that God has revealed to us about his own nature – that he is one God in three persons, Father, Son and Holy Spirit. Theologians call this type of belief a ‘mystery’: this doesn’t mean what we normally understand by the word, but simply claims that we can’t fully grasp the belief on the strength of human reason. But one thing we can say is that this belief isn’t obscure or remote: it directly concerns how we live in the world. In many ways the doctrine of the Trinity is the basis for all our moral teachings in the Catholic Church. For we hold that God has created humanity in his image, with a dignity and sacredness which is non-negotiable. The human person with this dignity is intended by the Creator to reflect the God in whose image we have been created. Today teaches us that the three persons within the Godhead – Father, Son and Holy Spirit – are united in a relationship of mutual love, self-giving and perfect equality. In the early Church it took many years for Christians to come to believe this fully and I think many Christians even today only pay lip-service to it, but it is as relevant today as it was in the fourth century when the Creed we say at Mass was being finalised. Mutual love, self-giving and perfect equality, the attributes of God, should characterise how we live and how we order our world. So when men and women live in such a way which does not reflect love, self-giving and equality then we deny something essential about how we’re made; we’re denying our createdness, we’re denying God.

This really does ‘raise the stakes’ when we look at what the Catholic Church teaches about social justice and how we should live in the world: interestingly both Benedict XVI and Francis in their letters about social teaching and creation explicitly point to the Trinity as the model for how we should live. If we sin against social justice by demeaning or discriminating against our neighbour, we’re not simply being uncharitable. We are denying God’s creative act; in reality we’re blaspheming against the Holy Trinity.

This has to give us the context for looking at police brutality in the United States encapsulated in the terrible killing of George Floyd in Minnesota last week and the protests in response around the country. I have posted on the parish Facebook page some reactions from Catholic bishops and journals in the US. The racism behind what has happened, and the appalling reactions of some people, is profoundly sinful within society, and it’s a problem that has not been seriously addressed. It would also be a mistake to assume that racially motived police brutality has not been a problem in this country. One of the challenges in the Covid-19 crisis is the need not to look simply at our own problems or difficulties at this time to get our priorities right. For example, it’s right, as the Cardinal and our archbishop have said publicly, that our churches should be open for prayer in the near future where we can do so safely: but I wonder whether some of those who have been agitating for this to happen earlier were as exercised about the sufferings of people as a result of Covid-19, or the injustices in society which these sufferings have exposed; I also wonder whether they care as much about racism. We rightly yearn for our places of worship to be open – but we mustn’t seek to go back into our buildings to escape from the world. We have a challenging message to proclaim and a call to conversion to the world; and our challenge to convert, in relation to the blot on the human family of racism, is based on what we believe about God.

That message, as we see this Trinity Sunday, is about love at the heart of God, Father, Son and Holy Spirit; a message we celebrate and share this weekend. As we do so we pray for George Floyd’s soul and the souls of others who have died because of police brutality, and we pray for the Church and people of the United States.