The Day for the Unemployed 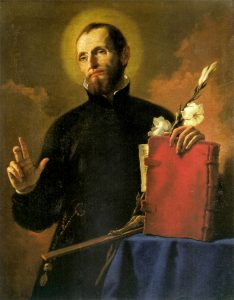 THIS PICTURE is of St Cajetan, an early sixteenth century Italian priest and religious reformer who is venerated as the patron saint of those who are unemployed – because of what he did to help poor people who were being exploited by greedy banks. The Sunday before Lent has been kept by all the churches as a special Day of Prayer for the Unemployed in this country for over twenty years, so today is a good day to ask for St Cajetan’s prayers for men and women without work, especially the long-term unemployed. In Catholic moral teaching there is a special place for what we put forward about human work. In his important letter about work, Laborem Exercens (1981), St John Paul II described work as the ‘key to the social question’; the modern tradition of papal teaching about social issues began with reflection about employment and the sufferings of the industrial working classes in the 1890s. Since then the Church has insisted on the importance of workers’ rights, the right to join Trade Unions, the right to decent working conditions and hours, the right to strike and so on; a person’s physical labour is not some-thing to be sold or exploited by his or her employer.

John Paul in 1981 developed Christian teaching further. The work we do reflects how we are created in God’s image – if we have a dignity because of being so made, then it is God’s will for us that what we do in life should reflect that dignity and have dignity itself. Dehumanising or degrading work is an abuse. The material world in which we live also reflects God’s goodness and love – and our work engages with that world. Work has a spiritual and religious meaning; for God, everything about our life is special, so the work we do has a meaning; each one of us has a vocation. This is why traditionally sloth or idleness has always been considered sinful – this doesn’t mean of course, that we shouldn’t rest. Many people overwork in our often frenetic society, and people have a right to a decent retirement.

It follows that all this enforced idleness as a result of unemployment is not in accord with God’s will. Unemployment is a social evil, particularly when it is widespread or when people are unemployed for long periods of their lives. You may remember that about twenty years ago we put on a study evening in the hall about a special report for the churches called Unemployment and the Future of Work, addressed by the then Bishop in Kent, the Franciscan John Jukes, God rest his soul (he was very active in helping people understand the Church’s theology of work and used to say Mass every year at the annual Trades Union Congress). Christian teaching cannot tolerate indifference about unemployment, or ever condone the use of unemployment as an economic tool.

There are numerous ethical issues surrounding both the nature of work and contemporary unemployment. Many people are worried, for obvious reasons, about their jobs or job prospects after the end of March (or later), here and in Ireland and the rest of Europe; indeed it is important, in terms of Catholic teaching, to see employment and unemployment as European issues. At the end of last year the umbrella group for Catholic Bishops’ Conferences in Europe (COMECE) organised a special conference in Brussels entitled Shaping the Future of Work – Towards a decent, sustainable and participative world of work (for more details click here). Movement of peoples, more frequent changes in jobs in people’s lifetimes, attacks on the rights of workers through unfair contracts and so on are issues which affect people all over the world, and it’s important for Christians to look at these issues with the eyes of faith.

Another work-related issue is human trafficking and slavery. Last month, on the feast of St Josephine Bakhita, the Church kept a special day of prayer for the victims of trafficking and slavery, and the Church in this country has taken a lead in supporting them through the work of the Santa Marta Group (details here); also of interest is the Centre for the Study of Modern Slavery at St Mary’s University (details here). A vast number of people are subjected to the most inhuman working conditions through this social evil, here and all over the world.

Our Bishops’ Conference has produced this special prayer for today:

O God, the source of human dignity, in your image every person is fashioned and by your Son all people are redeemed. Make us honour the work of your hands, that we may reverence you in those whom the world considers least and serve you in all whom society neglects.