I promised a couple of weeks ago to tell you something about the annual conference of the Catholic Theological Association, which took place at the beginning of the month in Twickenham. The title of the conference was Word of God, Words of God: Words, Image and Ritual in Religion and Life. There were ten substantial keynote sessions and the full papers should be published next year in the theological journal New Blackfriars: but as the teaching and study of theology is for the benefit of the whole Church it is important that you have some awareness of what is happening. As I have indicated elsewhere the teaching of theology and religious studies in universities and colleges is fragile, because of pressures on some institutions, because of government policies and the rapid decline in the number of pupils taking RE at any serious level in non-faith schools. The CTA exists to provide mutual support in this situation; we have been having annual conferences since 1984.

The initial session of the conference was led by Professor Anthony Towey from St Mary’s University, one of the university’s star lecturers. He has been involved in a national commission set up to review RE teaching in secondary schools and he spoke candidly about the issues around, including the hostility shown even from some within the teaching profession towards established faith communities in this country such as the Catholic Church. What we are all coping with is an increasing inability to understand anything approaching religious language – one contributor in the discussion described the task of teaching theology or religious studies as akin to Teaching English as a Foreign Language.

When we devised the conference theme we wanted to consider not simply verbal language about God and religious faith but also other media, so the second lecture was about theology and art. This was given by David Brown, until recently a Professor at St Andrews University in Scotland, who has written extensively about this. His lecture, illustrated by numerous pictures, explored how artists in Christian history have often aimed to elicit a religious response from the onlooker – religious art is not simply about beauty or conventional aesthetics.

On the second day of the conference this lecture was followed by a number of short papers given by members of the CTA. These included a reflection on the current abuse crisis (Dr Bridie Stringer), the ways in which we listen to religious language (Dr John Sullivan), the language of religious language on digital networks (Tim Kinnear), religious language in popular music, especially the music of Ariane Grande (Steph MacGillivray), the experiences of young adults in or on the fringes of the Church (Karen North) and the ways in which we can use Jesus’ words about being a eunuch in current debates about gender identity (David Jones).

On the third day sessions began with another well know St Mary’s figure, Stephen Bullivant, who has written a book about the mass exodus from the Church in the UK and the USA over the last sixty years. He has researched the phenomenon of atheism extensively, and in his paper reminded us that the early Christians were accused of being atheists by the authorities of the Roman Empire because they wouldn’t worship the gods of the State. This was followed by a fascinating paper from a young theologian from Cambridge, Alastair Lockhart, about religious language in other, rather ‘off-beat’ religious groups such as the Rastafarians. 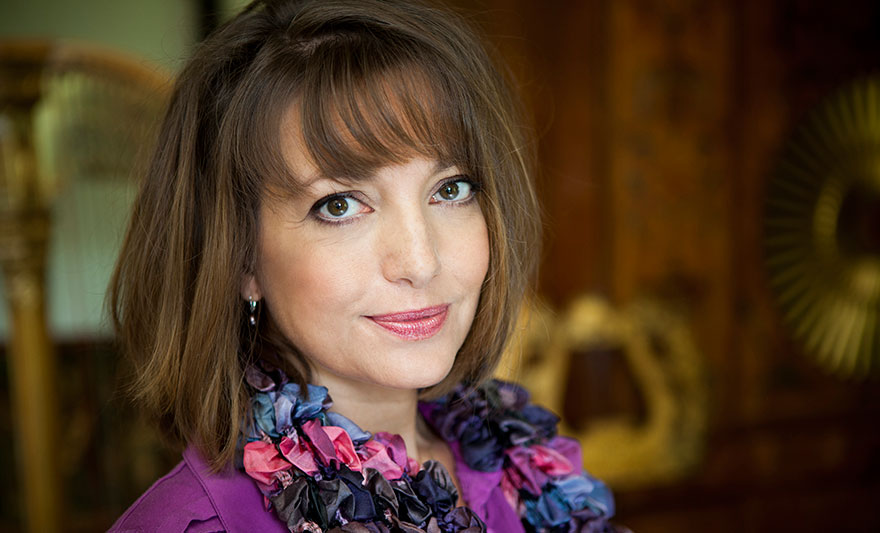 Music is an important way in which we try to communicate about God and religious faith. On the Wednesday afternoon we were joined by the acclaimed composer Roxanna Panufnik, shown here. She spoke about her music and her own religious faith – she has pioneered using religious music to break down barriers with Jews and Muslims. This session was illustrated with extracts from her music. That evening we had a conference dinner attended by Cardinal Vincent Nichols who also addressed us at the meal, also reflecting on music, this time the music of the Scottish composer Sir James Macmillan.

The last morning contained two final papers. Professor Janet Soskice, recently retired from Cambridge, about the different names of God which we find in the Scriptures and the Christian theological tradition. The names we apply to God are all inadequate in many ways, but at the same time they tell us something which is difficult to capture in other ways. Our final lecture was by Professor Lewis Ayres from Cambridge, who spoke about the way the fourth century founder of eastern monasticism, St Basil of Caesarea, talks about the ways in which it is actually at times difficult to talk about God.

I hope this brief sketch has given you a flavour of what we did – and we aim, through this sort of reflection, to be of service to the whole Church. How we talk about God is central to how we share the gospel, how we impart the Christian message. So often harsh or misleading language about God can alienate people from religious faith altogether. We also face big challenges in a culture where people have so rapidly lost the language, the ways to receive any religious message, whether it is imparted through words, art or music. Please pray for all those who teach theology in this country.