The dishonest steward is one of the stand out characters in the Gospels. He may be an invented character, to illustrate a point, but surely we can all recognise something of him in people that we have met in our own lives and, if we are truly honest, perhaps in ourselves. This weekend, in our first reading from Amos and in the Gospel from Luke, we are given a very clear message about the role of money in our lives. Amos tells us that the Lord will never forget a single thing done by those who trample on the needy and suppress the poor. Luke meanwhile makes a distinction between those who are astute in the matters of this world and the children of light, those who follow Christ.

The message from our readings this weekend is timely as an economic crisis is overwhelming our nation. The number of households that are forced to resort to using one of the over 2,500 food banks across the UK continues to increase, food insecurity is a growing threat to the poor and now these pressures are escalated by the prospect of fuel poverty. The situation could not be any more severe. Inflation has climbed above 10%, and the Bank of England has warned that the UK faces a year long recession starting this Autumn. In order to flourish as human beings we all need to be fed, clothed and housed so that we can continue to focus on our spiritual growth.

In the Gospel Christ appears to praise the dishonest steward for his astuteness but truly He is making the distinction between winning friends in this life, through tainted money, and securing blessings for eternity by living in the light of Christ. 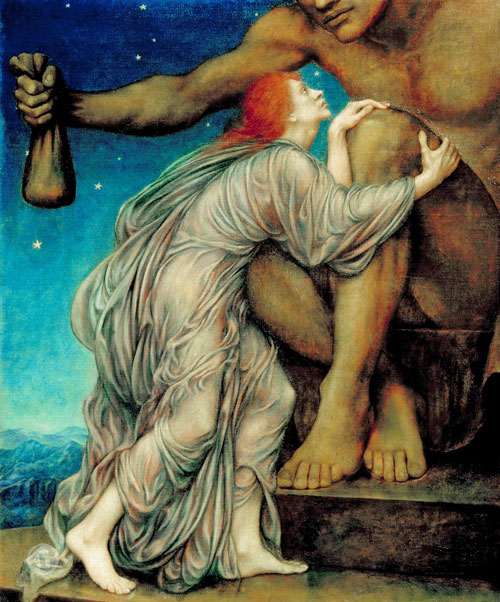 Money is not inherently evil, although it is always tainted by the temptations that it brings, but as Christ says in our Gospel this weekend we cannot serve two masters, we cannot be the slaves of both God and of money. In Hebrew money translates as ‘mammon’ and the word has come to be used over the centuries to personify the pursuit of wealth, at the cost of one’s soul. The striking painting by Evelyn de Morgan, shows a woman clutching desperately at the knee of the statue of Mammon, yearning to look upon his face, which stares down at her remorselessly. The statue holds out a bag of gold, but the woman ignores the money. She has moved from the love of gold (which in itself is neither good nor evil) to the love of Mammon himself, wealth for its own sake, and so has cut herself off from the love of God and seems beyond redemption. It’s an allegorical image but the temptation is real for each and every one of us.

Our new prime minister’s decision to cap energy bills in order to protect households has been welcomed, but the measures are not targeted at the poorest households who will continue to suffer disproportionately. Meanwhile energy companies will continue to reap large, perhaps excessive, profits as the public purse covers the cost of capping bills. As Catholics it is our duty to question these decisions, do they serve the common good, and do they help to protect the poor? Groups such as the St Vincent de Paul Society, who help those in need, are reporting increasing demand for their services. We may be unable to directly influence political decision-making at this moment, but in these difficult times the challenge for each of us is to be even more generous than before, and to remember those less fortunate than ourselves, who are carrying an unfair burden, whose suffering will increase before things improve.

It is also worth reflecting on the lessons of Pope Francis’s encyclical Fratelli Tutti, that everything and everyone is connected, we are a global community. The drought that many around the world have experienced this summer is caused by Climate Change which in itself is a consequence of our failure as the human race to act as ‘honest stewards’ of creation. In fact energy prices this winter will be pushed higher because German boats are supplying less coal to their power stations because water levels are so low in the rivers, reducing their ability to export electricity. French nuclear reactors cannot operate at full capacity because they are limited in how much heat they can discharge into their shrunken rivers, and so cannot sell as much electricity abroad. Meanwhile, Norway is deciding whether its exportable hydro-electric output needs to be reduced, in order to maintain healthy water levels in its reservoirs. In countries such as Pakistan excessive rainfall has overwhelmed fragile infrastructure, where crowd funding has been squandered on advertising rather than building, leaving millions homeless. In the years to come we will all need to make further sacrifices to help reduce the world’s dependence on fossil fuels. Meanwhile, Europe’s efforts to support the people of Ukraine through sanctions on Russia, have exposed just how vulnerable the continent is to the Russian threat to turn off the gas supply. Vladimir Putin has poetically likened Europe’s vulnerability to the wolf whose tail is frozen to the ice in winter. The pursuit of justice, and of the common good, comes at a cost. Are we each prepared to pay the price?

Details of our local food bank can be found HERE

Our local branch of the St Vincent de Paul Society does wonderful work supporting those in need in our Parish, you can find out more HERE 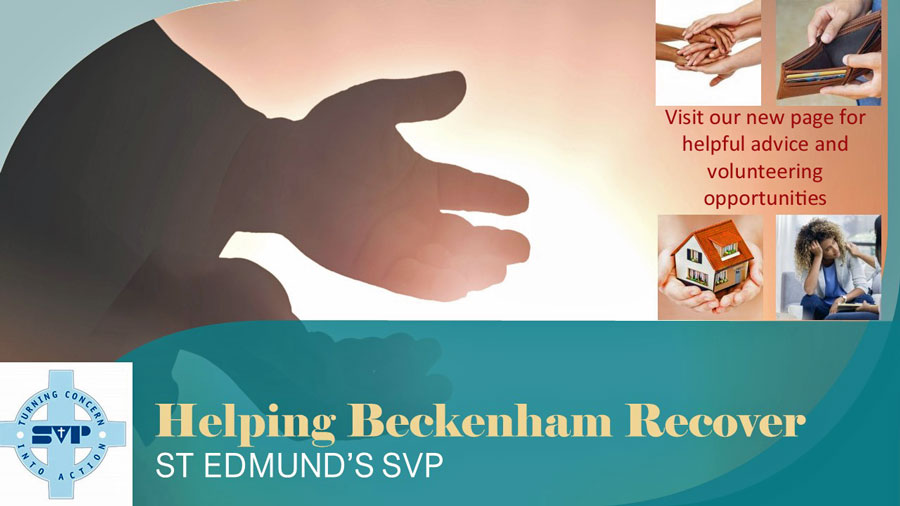