Repent, for the Kingdom of Heaven is Close at Hand!

St Edmund's RC Church, Beckenham > Sermons > Repent, for the Kingdom of Heaven is Close at Hand! 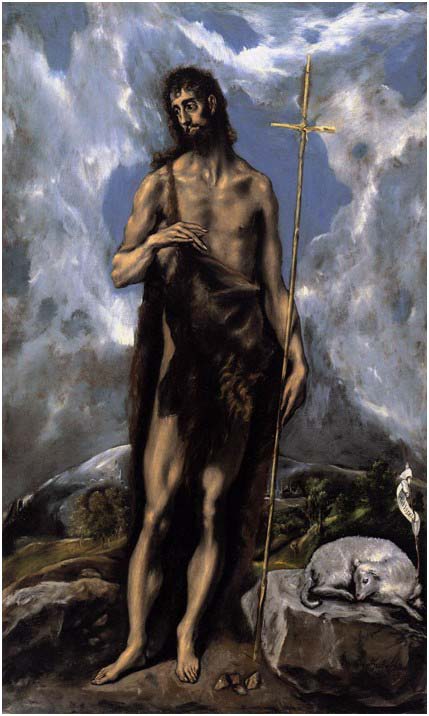 WE KEEP THE SECOND SUNDAY OF ADVENT AS BIBLE SUNDAY, borrowing a tradition from the Church of England. It is particularly important that we reflect about the Bible this Advent, as we are well into a special Year of the Word. A lot of people who seldom darken the doors of a church do hear at least some of the Scriptures at this time of year, so we have many opportunities; in addition, there is a brand new Catholic Bible which has just been published (the Revised New Jerusalem Bible, study edition, Darton, Longman and Todd) which would make a good Christmas present. As this point in Advent, unusually, is also marked by the closing days of a General Election campaign, we should also be seeking guidance from the Bible about how we should vote on Thursday.

On the Second Sunday of Advent each year, the key figure in the gospel reading is always St John the Baptist, shown here in a painting by the Spanish artist El Greco. Because we’re used to hearing about him every year in Advent, perhaps it is easy to forget what an unsettling and disturbing figure he is in the gospels. He doesn’t play by the rules, he doesn’t care whom he offends – which is why he is brutally beheaded in the end. But the gospel writers aren’t really interested in his personality, fascinating as it might be for us. He has a job to do, a function to fulfil – to get people ready for the coming of the Messiah. This exercise is all about one thing – telling people, in no uncertain terms, to repent of their sins and seek forgiveness through being baptised.

This is why, although somewhat less austere than Lent, we treat Advent as a penitential season. We don’t say or sing the Gloria on Sundays, we have much less organ, no flowers (except next Sunday) and purple vestments and hangings. Advent is the reason why we shouldn’t jump the gun and celebrate Christmas early. Christmas does not happen until Christmas Eve. It is because Advent is a penitential season that we should ourselves prepare for the coming of the Messiah by examining our consciences and going to confession before Christmas. When we do this we need to look at the whole of our lives. I posted on the parish Facebook page last week details of how the neighbouring diocese of Arundel and Brighton (Surrey and Sussex) has launched this Advent a special call for us to confess our sins against the environment; the details are on the website of The Tablet (and I think in the print edition).

In addition, a call to repentance is surely part of the Christian message in a rather nasty General Election campaign. It is essential that we vote in line with our Catholic faith – if we say our faith has nothing to do with it we’re showing how unimportant our faith is to us. Divisiveness, hatred, serial lying, populist nationalism, racism, contempt for the poor whom God loves – these things don’t just happen. They are part of political life for a reason – sin. People get what they vote for; I am afraid in some ways we get the leaders we deserve, because of our indifference and our inability to discern wickedness. What is rather odd at times is when some Christian leaders make bland calls for reconciliation, as if the deep divisions in our society can be somehow papered over, as if we can just ‘move on’ as if they didn’t exist. What we learn this Sunday from St John the Baptist is that this can only happen if we repent. It can only take place if we acknowledge our sins, if we face up to the depravity of so much of our political culture and ask for God’s forgiveness: not just for individual men and women, but for our society and for our country which has lost its way and turned away from Christ. To say all this is unsettling and not likely to endear us to other people in the run-up to Christmas; but deep down we know it’s the way to celebrate an authentic Advent, to be true to the preaching of St John the Baptist.

The Bishops of England and Wales have issued a message for the General Election, available HERE. You can pick up a copy from the back of the church. In addition you might want to look at the much longer document which they issued before the 1997 General Election entitled The Common Good (about which we ran a course in this parish) as it gives you some of the background and addresses eerily similar issues – you can find it HERE . In addition, last Tuesday, the feast of St Francis Xavier, was also the Day of Prayer for Migrants and Refugees. The Holy Father’s message for this day, very relevant for the election, is on the notice board in the porch and can also be found HERE .