Queen of Peace, Mother of the Poor

Last Monday morning, as I was putting in my car the very generous gifts you gave to the London Catholic Worker house in north London, the world was digesting the defeat of the Far Right nationalist Marine Le Pen in the French Presidential election. The coincidence seemed fitting: in every right wing nationalist movement across Europe (including the UK) hostility to refugees and migrants is fundamental. Both events were signs that such people with this agenda do not have the last word, they do not have to win: goodness, kindness and generosity triumph in the end. Many thanks for the generosity of your gifts and your commitment to the work of the Catholic Worker community, going back many years now. Also at the beginning of the week members of the community joined with members of Caritas Westminster for a prayer vigil outside the Home Office in central London in relation to the government’s proposals to deport asylum seekers to Rwanda (for details of the work of Caritas in this respect see here). While to some extent in Eastern Europe hostility to refugees has been neutralised by the welcome and support to refugees from Ukraine (the Holy Father recently thanked the newly ‘re-elected’ President of Hungary for this) this shows deplorable inconsistency and may well not last long. As you know the Sisters of St Peter Claver and other religious orders, along with Caritas, has been leading efforts to welcome and support those fleeing their country in the midst of this terrible war.

This Sunday we begin the month of May, traditionally dedicated to Our Lady, Queen of Heaven. In school we have May devotions every Friday this month at 830 and our traditional procession later in the month when the statue in the school grounds will be crowned with flowers; in England particularly showing our love for Mary as our true Queen has been part of our Christian heritage for centuries, even though it was almost obliterated at the Reformation. The tradition of dancing around a ‘Maypole’ is part of the way in which people in this country have shown their love for Our Lady. These devotions are important and part of our identity as Catholics; they also root our love for Mary in the Church’s liturgy in the Easter season. For in this season we also reflect on Mary rejoicing with the disciples at her Son’s rising from the dead; also we see her, particularly in the later weeks of the Easter season, waiting with them in prayer for the coming of the Holy Spirit at Pentecost.

We need Mary so much. Since the horrors of the First World War, much of it fought in what is now Ukraine and in the name of the same shabby nationalism, Catholics have venerated Mary under the title ‘Queen of Peace’, inserted into the Litany of Our Lady by Pope Benedict XV in 1917, who also commissioned a statue of her for the basilica of Santa Maria Maggiore in Rome. This is rooted in the picture we have of Our Lady in Sacred Scripture. Mary, throughout her life, lives un-der Roman military occupation in a brutal empire; she sings in her Magnificat of how God ‘pulls down the mighty from their thrones’; she stands by her Son as he suffers the death penalty on the Cross. Mary knew about the evil of violence and war. Many popes have reflected on how mothers suffer so much through the evil of war, seeing their children die, perhaps even babies (as has happened in Ukraine), perhaps among those fighting. Mary who joined in her Son’s sufferings is particularly close to them in these dark times. Moreover when we think of Our Lady as Queen as we do this month we reject models of monarchy and authority which are rooted in military power and the glorification of war: Our Lady is a different type of Queen, far removed from military uniforms, marching and gun salutes, Queen of Peace. All this is why it is so poignant, as Pope Francis has said himself, that the city in Ukraine which has suffered so much, Mariupol, has borne Our Lady’s name since the 18th century; Mary is still not far from places of war and suffering, all the worse because this war is blessed by the authorities of the Russian Orthodox Church. Seeing Mary as Queen of Peace helps us understand the authentic witness of our Church for the fighting to end, a far cry from warmongering politicians in the west.

Just as hostility to migrants and refugees always goes hand in hand with a nationalism which glories in war (and not just the leaders of the Russian Federation), so seeing Our Blessed Lady as Queen of Peace also focusses on her as Mother of the poorest, who are often those who leave their homes as refugees, as she did on earth when the Holy Family fled to Egypt. Especially since the Second World War, which caused one of the largest mass migration of refugees in the history of Europe, the Church has identified refugees with the Holy Family, as an inspiration for our witness for them. This is why the Easter sermons of Cardinal Nichols and both Anglican archbishops, much to many people’s annoyance, attacked the UK government’s latest proposals: the duty to welcome refugees, wherever they are from, is a key Christian duty. The picture here shows the chapel put up a few years ago (no longer there; it was bulldozed with everything else) in the refugee camp which was in Calais, and you can see an image of Our Lady on the front of the makeshift structure: again, Mary is not removed from the sufferings of her children. So in this her month pray to Our Lady for peace and for refugees. 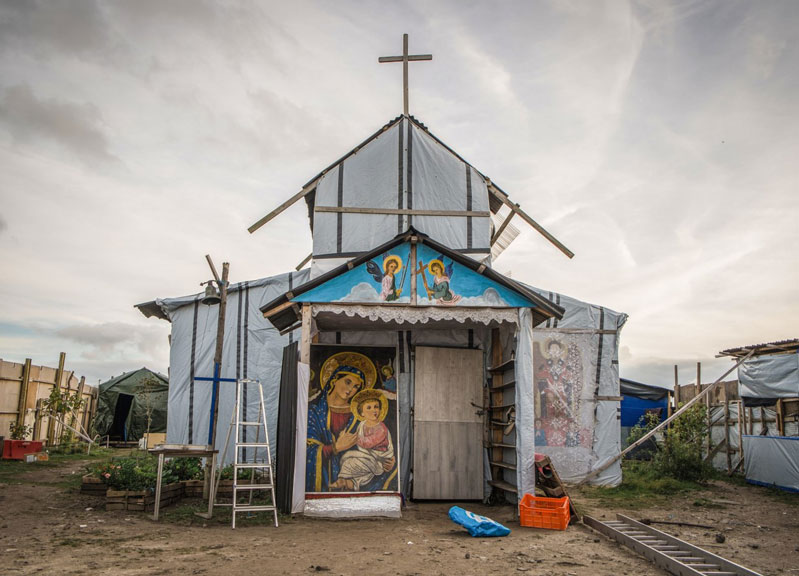