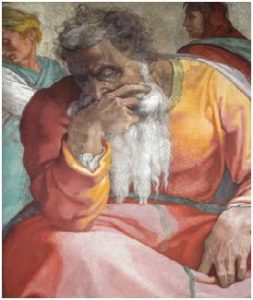 IN 2015 the Holy Father, following the example of Patriarch Bartholomew of Constantinople, designated today as a special Day of Prayer for Creation, in his encyclical Laudato Si’. One of the rather facile criticisms made of that letter at the time was that the pope was too pessimistic in his assessment of the damage we are doing to the planet, to God’s created order. His urgency and the strength of his language many found unsettling. Given the current fires in the Amazon and Grand Canary, and policies being pursued by the leaders of the United States and Brazil, for example, the picture has in many ways got even gloomier in the last four years.

Those who attacked the pope for being pessimistic really don’t understand the books of the prophets in the Old Testament – a good example would be Jeremiah, depicted here looking characteristically miserable in Michelangelo’s Sistine Chapel in the Vatican. Prophets like him were not primarily concerned with predicting the future: rather they were concerned to denounce what the people and their rulers were doing at the present time. This is often a message of gloom and doom because they reject the solutions to problems which rulers are putting before the people – Jeremiah repeatedly tells the rulers of Judah they can’t avoid the destruction coming on the state; military alliances with other peoples simply won’t work. This makes the prophets deeply unpopular – Jeremiah was nearly killed and was thrown down a well at one point. In the New Testament Jesus endorses the ministry of the prophets of his people as a way of attacking the religious leaders in his own day.

In our age, partly because we hear the message of the prophets read at Mass, we have recovered a sense of how this tradition is central to how we proclaim Jesus to the world. People often do have to be told how bad things really are. Purveying false optimism is a sure sign that politicians are lying through their teeth. Many people, who really don’t want to feel negative about the future, can be manipulated, particularly if the politicians preaching an optimistic message have boundless self-confidence, perhaps imbued by an expensive private education, protected by their personal wealth from future economic hard-ship. This is a widespread phenomenon – a few years ago in America a book was written by the cultural theorist Lauren Berlant entitled Cruel Optimism, which explores ways in which we sometimes desire things which we know will be harmful, a rather widespread phenomenon in our country at the moment.

Catholic Christians familiar with what the prophets say in the Old Testament will be suspicious of politicians who engage in the glib language of optimism – language attacking ‘the doubters, the doomsters, the gloomsters’ or invoking Britain’s ‘can-do spirit’; what you also get are a lot of arc references to Dunkirk and even the Titanic. It’s all an effort to patronise people, to distract them from hard facts about economic realities, or the worsening racism and hatred in the country. Using 1950s comic book language is part of the trick: our ‘betters’ simply want us to trust them, in spite of their mendacity and incompetence.

The rulers of the kingdoms of Judah and Israel condemned by Jeremiah, Amos and the other prophets in Sacred Scripture were surely like this, as rulers so often are. The contempt which people in power have for those whom they rule depends on lying to people about how things are: ‘Trust us, everything will be all right.’ The Bible is the revelation of God to us: the prophetic writings are in the Scriptures to teach us something. The God of the poor and the oppressed, speaking through his prophets, is unimpressed by the glib assurances of the powerful and the rich. In the Bible, prophets call people to repentance – both the rulers and the whole community. An essential part of being able to seek and receive forgiveness from God, as we realise when we go to Confession, is to know exactly how bad things are, in our own lives and in the life of the world.

That is why prophetic pessimism is definitely not the same as the grave sin of despair. We can only find hope by realising the need to be forgiven: glib optimism is a symptom of a society which has lost any sense of sin, presided over by people of low moral worth. This is why as Catholics we should also be wary of calls from some Christian leaders for reconciliation and a desire to ‘move on’. If the damage in our society is the result of sinfulness and systematic lying, then reconciliation isn’t really possible until those responsible, and people who’ve supported them, acknowledge this. So Jeremiah says ‘Woe to those who cry “Peace, Peace!” when there is no peace (6:14). What we really need are prophets.