Praying for the dead in a time of plague

St Edmund's RC Church, Beckenham > Sermons > Praying for the dead in a time of plague 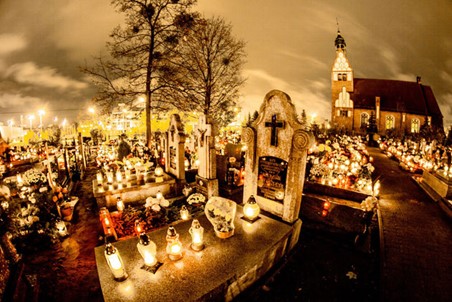 SOME OF YOU will recognise this picture as being of a cemetery in Poland at this time of year: filled with candles and other religious objects as an act of prayer for those buried there. I don’t know whether under current restrictions this tradition is possible this weekend. All over the Catholic world there are similar acts in this month of the Holy Souls, November.

It is stating the blindingly obvious to point out that November is particularly poignant all over the world this year. By last Wednesday evening over a million people worldwide had died of the pandemic, and at least 45,000 in the UK. While historically it’s worth remembering that many plagues have killed far more people, this is still a shocking statistic. Cultures in the world which have prided themselves for power over nature and people’s destinies have experienced a sudden vulnerability; some of the richest countries in the world have been reduced to powerlessness – often because of terrible political leadership – in a very short space of time. Some governments have reacted competently, and even then been proved wrong in some decisions; others have been inept from day one and remain so.

The reality of deaths in this sad time is worth reflecting on. Anyone who has had respiratory problems, or has family members who have (my late father suffered from emphysema) will know that chronic breathlessness is a frightening thing, and those who have suffered severely and died from this virus have experienced this severely. But what has been particularly painful is that because of the danger of infection in so many cases those who have died have been unable to be with family members, except possibly at a distance; in the early weeks clergy were also unable to minister the last rites of the Church. Older Catholics may remember being taught about a ‘good death’, bona mors: that has been very difficult this year. Even now when we minister to the sick our physical celeb-ration of the sacraments is different: we cannot lay hands on the head of the sick person, and we anoint the sick person not with our thumb but with a cotton bud. Everything about how the Church tries to support the seriously ill and the dying has been changed and compromised this year, and we can’t claim to have been prepared for this.

Lonely deaths have been exacerbated by lonely, often bleak funerals. In the first period without a Requiem Mass, with only a dozen or so people fearfully gathered in a crematorium chapel or at the graveside; even now numbers are limited and as at all acts of worship there is no congregational singing. Many bereaved people have not been able to mourn properly with others – so much has inevitably become small, private even. This year death has stared us in the face in a new way, and it hasn’t been a good experience. We cannot say, as the popular poem (so popular at funerals) says, ‘Death is nothing at all’. The Bible and our Christian tradition has always had a place for lamentation, a time when in our prayer and worship we can be open about our sadness and grief, and we need to have space for this.

So, to move to less gloomy language, November comes at the right time. Perhaps in the midst of all this we’re learning some important things. At a Catholic funeral, at a Requiem Mass, we have one over-riding priority: we’re there to pray for the dead person in Purgatory, and to offer for that person the supreme act of worship, the sacrifice of Jesus on the Cross, in which we participate in the Mass. This is the most important thing we do, and we do it for the dead person. This is what makes the Catholic ‘way of death’ different, not only in relation to unbelievers, but also many other Christians. Comforting the bereaved, thanking God for the dead person’s life and reflecting on the person’s life are important – but they are secondary. The stark simplicity of funerals in the last few months can perhaps help us realise this. We have to get our priorities right.

This month, our prayer for our loved ones who have died, including many who have died of this terrible virus, affirms these basic Catholic beliefs. We don’t do this to score points against others; but we do have something to offer others. When we pray for someone who has died we recognise our dependence on God. That’s why in a proper Catholic funeral the primary focus is on God. Praying for the dead also affirms a key insight about what we are like, often overlooked nowadays in funerals: that we are flawed human beings, who need prayers when we die because we’re flawed and sinful. Also, November should be a time for solidarity: we join ourselves with others as we pray to God particularly this month for those who have died; we realise that we’re not alone and, in spite of the painful deaths which have happened, nor are those who have died when we pray for them. If you have lost loved ones this year, either from Covid-19 or from other causes, please be assured of the prayers of this community, this month above all, for their souls.