Pilgrimage of Trust and Mercy

Twenty six pilgrims returned from Poland late last Saturday in the rain. We were delayed at Heathrow and then again on the coach journey to Beckenham. The rain was still relentless when we finally arrived in Village Way in the early hours of Sunday morning. It wasn’t ideal of course but somehow it didn’t seem to matter greatly because the pilgrimage itself had been so rich in meaning, leaving a lasting impression.

In some ways I am rather spoilt for choice when reflecting upon the places, experiences and emotions that made up our seven days in Poland. The vibrant medieval main square of Krakow had on one of its sides, the basilica of Our Lady of the Assumption. Here, the constant flow of the faithful to pray before the Blessed Sacrament in the chapel dedicated to Our Lady of Czestochowa, was impressive. We would see a number of examples on our travels, of strong faith among young and old, a treasure that has sustained them throughout a bloody history of war and occupation.

The following day and in total contrast to Krakow, we encountered Auschwitz. Like others in the group I had been here before but it still had the capacity to shock and offend me deeply. The author of my guide book described it as ‘a grim, disgusting place’ but one that everyone should face up to humbly and honestly. How could members of the human race become so intent on dehumanising others? A meditation by Pope Benedict on a visit to Auschwitz is worth reading over and over again:

To speak in this place of horror, in this place where unprecedented mass crimes were committed against God and man, is almost impossible – and it is particularly difficult and troubling for a Christian, for a pope from Germany. In a place like this, words fail; in the end, there can only be a dread silence – a silence which is itself a heartfelt cry to God: Why, Lord, did you remain silent? How could you tolerate all this?

In silence, then, we bow our heads before the endless line of those who suffered and were put to death here; yet our silence becomes in turn a plea for forgiveness and reconciliation, a plea to the living God to never let this happen again.

It was, therefore, rather fitting in the days that followed that we made timely visits firstly to the monastery of Jasna Gora in Czestochowa where we were able to gaze upon and pray before the Black 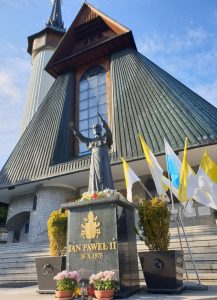 Madonna treasured by Poles as the Nation’s Queen and protector, and then to Zakopane at the foot of the Tetras Mountains where we experienced the Shrine of Our Lady of Fatima built by the parishioners in thanksgiving to God for saving Pope John Paul from assassination in St Peter’s Square.

One of the great highlights of this pilgrimage was the visit to the Sanctuary of the Divine Mercy and the John Paul II Centre where one couldn’t help be reminded of the central message of mercy and trust, given by Our Lord to St Faustina Kowalska. In the Divine Mercy image which many of you are familiar with, Jesus explained to Faustina:

The rays represent the Blood and Water which gushed forth from the depths of my mercy when my agonising heart was pierced on the cross. The pale rays symbolise the water which cleanses and purifies the soul; the red rays represent the blood, which gives new life to the soul. These rays will shield the soul before the justice of my Father. Fortunate are those who live in this shelter, for the justice of God will not reach them there.

On the day of St Faustina’s canonisation (30th April 2000) Pope John Paul stated: ‘Those who remember, who were witnesses and participants in the events of those years (WW II and preceding years), know well how necessary was this message of mercy. Jesus told Sr Faustina, ‘Humanity will not find peace until it turns trustfully to Divine mercy.