Look down in mercy upon England thy Dowry

SOME OF YOU may be old enough to remember a satirical book about English history published originally in 1930 (but reprinted for many years) – 1066 And All That, by W. C. Sellar and R. J. Yeatman. This is what the book has to say about Richard II, King of England from 1377 to 1399: ‘Richard II was only a boy at his accession: one day, however, suspecting that he was now twenty-one, he asked his uncle and, on learning that he was, mounted the throne himself and tried first being a Good King and then being a Bad King, without enjoying either very much…’ He has tended to have a ‘bad press’ historically, partly thanks to Shakespeare; his conduct in response to the ‘Peasants Revolt’ in 1381 (which reached a climax not far from here in Blackheath) is certainly controversial. However, as an act of thanksgiving after this, on the feast of Corpus Christi in 1381 in Westminster Abbey, the king dedicated England to Mary as her ‘dowry’, affirming the special devotion to Our Lady which the people of England showed during the Anglo-Saxon and Medieval periods. 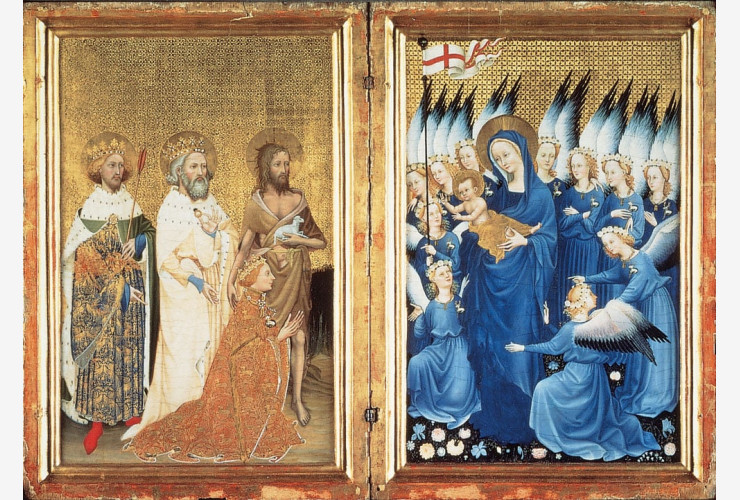 The Church now is rededicating England to Our Lady and this will take place at Walsingham, the historic centre in this country of devotion to Mary, on Sunday at 12 noon, in spite of the suspension of public worship. We see England as a ‘gift’ to Mary for her protection and prayers. For more details go to this section of the Bishops Conference website:   CLICK HERE.  The original dedication is the background for the Wilton Diptych from the 1390s (which is in the National Gallery) in which the king is shown kneeling before the Virgin and Child and the English flag.

Some words of caution. First of all, the fact that this original dedication by King Richard, possibly one of the few good acts of his reign, followed the revolt doesn’t taint Our Lady with his conduct in response to the revolt, which is at best questionable; the revolt was brought about by injustice and the English State’s obsession with war. Second, we do need to acknowledge that the notion of a ‘dowry’ in relation to marriage, as some theologians have pointed out, could be at odds with our theology of marriage, which Christian theology sees as a freely undertaken partnership of equals; we should also bear in mind the continuing problem of dowry-related violence against women, particularly in south Asia.

Properly understood a gift is a free act of love. So when we talk about our country as being ‘given’ to Our Lady for her protection and prayers, it’s a sign of our love for her. Medieval devotion to Mary in England is well attested and goes back a long way. The now widespread practice of celebrating Mass on Saturdays in honour of her is thought to have originated in Anglo-Saxon England. In the Middle Ages. Walsingham was not only the principal Marian place of pilgrimage here but the most important in Europe; the terrible destruction of the shrine at the hands of King Henry VIII and Thomas Cromwell was one of the key points of rupture in the English Reformation. Catholics since then have always been conscious of the medieval legacy and seen it as a source of strength; the heading of this article is taken from Cardinal Nicholas Wiseman’s well-known Prayer for England, for many years said at Benediction:

‘O BLESSED VIRGIN MARY, Mother of God and our most gentle Queen and Mother, look down in mercy upon England thy “Dowry” and upon us all who greatly hope and trust in thee. By thee it was that Jesus our Saviour and our hope was given unto the world; and He has given thee to us that we might hope still more. Plead for us thy children, whom thou didst receive and accept at the foot of the Cross, O sorrowful Mother. Intercede for our separated brethren, that with us in the one true fold they may be united to the supreme Shepherd, the Vicar of thy Son. Pray for us all, dear Mother, that by faith fruitful in good works we may all deserve to see and praise God, together with thee, in our heavenly home. Amen’.

When the rededication was being planned no one foresaw where England would be in March 2020. But Mary is our mother in times of sorrow and distress as well as in times of joy, and we need Our Lady’s prayers with a particular urgency at this time. As Christians it is important for us to see every crisis or problem as an opportunity, as a potential channel of God’s grace; this is not easy if we’re physically unable to get to Mass in our churches, but in lots of ways new doors are being opened for people by what is happening; we also have the opportunity to witness to the truths of Catholic moral teaching in our response to world events.

Throughout Christian history our brothers and sisters in the faith have emerged strengthened by periods of adversity: this weekend, as we rededicate this land to Mary, we ask that she will be with us at this time.