Light in the Midst of Darkness 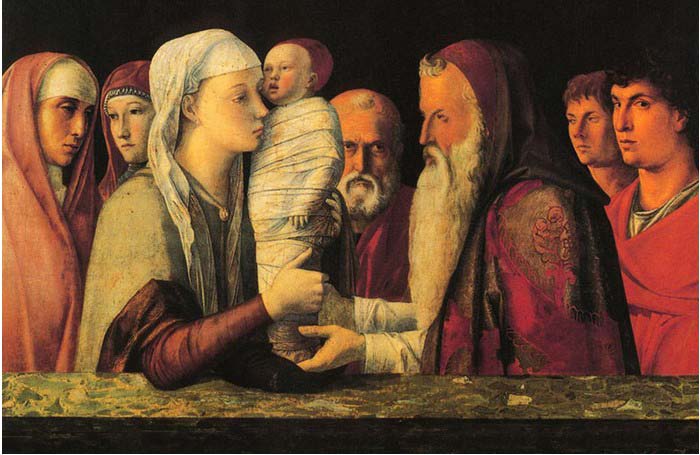 SOME OF YOU may have seen this picture, Bellini’s Presentation of Christ in the Temple, in the recent and stunning Mantegna and Bellini exhibition at the National Gallery. This Saturday, at the morning Masses, we kept the feast which commemorates this event, known in England for centuries as Candlemas. St Luke’s gospel tells us that forty days after the birth of Jesus his parents took him to the Temple in Jerusalem to ‘present’ him to God, in accordance with Jewish law and custom. The old man Simeon in the Temple recognises that the baby is special and praises God; in his hymn of praise to God, known as the Nunc Dimittis (from its opening words in Latin) he talks of the baby as the ‘light to enlighten the gentiles’: consequently from the earliest centuries this feast day in the calendar has been marked by the blessing of candles and a procession with candles, hence the traditional English name. In many places this has been the final end of the Christmas season, which is why in this parish we keep the Christmas crib in place until this weekend, and we had a procession of candles at the 10am Mass on Saturday.

In this 1993 classic The Stripping of the Altars the Cambridge historian Eamon Duffy reminds us that in England and the rest of northern Europe Candlemas in the Middle Ages was particularly important because of bad weather. After a very gloomy winter (and winters were colder) a religious festival where the imagery of candlelight and the heat from candles lifted people’s spirits. Moreover people brought to church candles they were going to use at home in the coming year for them to be blessed along with those used in the procession. It was apparently the custom for people to light these candles in windows during storms, so that because they had been blessed the home would be kept free from harm. People also had candles blessed so that they could hold them while standing around the bed of a relative who was dying, during the celebration of the final sacraments. These customs were an important way of linking ceremonial and ritual in church with the way people tried to express their faith at home. In some ways we have rather lost that ability – things we do in church can easily be things we only do in church (praying, making the sign of the Cross, and so on). Traditionally, however, Christians have tried to see their homes as holy places, hence the custom (which is probably dying out gradually) of asking for a house to be blessed.

Simeon’s hymn in the gospel account, which traditionally we also say or sing at Compline or Night Prayer before we go to bed (because of the opening words ‘At last, all-powerful Father, you give leave to your servant to go in peace…’) helps us in so many ways. Describing the baby he is holding as a ‘light’ has always been powerful – not in the gloomy winters of northern Europe but when the disciples of Christ have felt dejected or low. How must faithful Catholics have felt in Nazi Germany trying to celebrate their Kerzenweihe, aware that they were marking a Jewish ceremony in the Jewish Temple in Jerusalem?

While we are not in the same boat there is a great deal of darkness around at the moment – in our own country, in the rest of Europe, in the rest of the world. This darkness is to do with hatred, fear, suspicion, national pride and selfishness and all the violence of language and action which flow from these things. Such darkness represents a real turning away from God, a rejection of the Christian message: and it can entice some within the community of faith. Such darkness can really poison the life of a community: when you feel in its grip nothing goes right; everyone is dragged down by it. Darkness of this kind is a real moral and spiritual problem. For a Christian it shows us some-thing which we can perhaps easily ignore – the presence and activity of Satan in the world. For me, one of the most important points in the ceremony at which children are baptised is the moment when the deacon or priest asks the parents and god-parents of the child ‘Do you reject Satan, father of sin and prince of darkness?’ I am sure sometimes this causes some awkward fidgeting in the congregation, but it’s important because it reminds everyone of the existence of evil in the world. Such evil needs to be recognised and discerned: we need to know when it is there.

This wickedness and darkness is something particularly strong in Britain at the moment – and yet we fail so often to name it. Its strength and pervasiveness can lead us to despair, if we see Christian values and teachings so trampled upon, if we see so much falsehood and deceit. But Candlemas, because of the rich imagery of the light of Christ overcoming darkness, shows us a better way. We are taught that the light overcomes the darkness: the light of the world has won. The victory of Our Lord on the Cross demonstrates that evil and darkness do not have the last word; Satan has lost. All we really see in our world is his last death-throws – Jesus Christ has won the victory. This is why Candlemas is a great celebration of victory over the powers of darkness and evil which still stalk the world. Things look grim, but we know, deep down, that goodness, virtue and kindness will win in the end; we know that God has won; the darkness and evil in the world and in our own land will, in the end, be overcome by light.