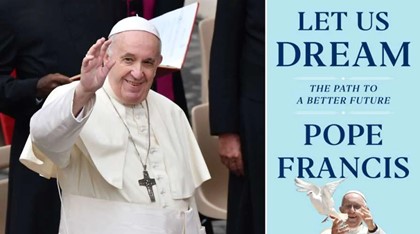 ONE OF THE VERY GOOD THINGS we can say about the year 2020 now drawing to an end, and there aren’t perhaps many such things, is that God has given the Church and the world a tremendous pope for this trying time. From the very beginning of the pandemic Pope Francis has provided outstanding moral leadership for not only Catholic Christians but for countless others, in contrast to many appallingly bad national leaders; this is a sign of God’s grace and his love for humanity as we have faced so much sickness, suffering and death. The Holy Father’s teachings have shown God’s compassion for those who have been suffering and at the same time challenged all of us, every day.

I wrote a few weeks ago about his latest encyclical, Fratelli Tutti, but it’s not easy to keep up with this man, who will be 86 on Thursday; while we were still digesting the encyclical, he has published a new book, in collaboration with the English journalist (and his biographer) Austen Ivereigh, entitled Let us Dream. It’s very readable, only £10.99 and easy to get, so I am not going to try and summarise it; but it is very good Advent reading. It’s not a long book, but it is not easy to summa-rise briefly, so I will simply give three examples of his writing as he looks at the world during Covid-19.

The first example is when he is writing about the gifts of women in the Church and the part they have played in the pandemic crisis:

‘Women have been at the same time among the most affected and the most resilient in this crisis. Affected, because they are more likely to be on the front line of the pandemic – about 70 percent of all those working in healthcare worldwide are women – but also because they are harder hit economically while working in the informal or unpaid sector. The countries with women as presidents or prime ministers have on the whole reacted better and more quickly than others, making decisions quickly and communicating them with empathy (and writing a little later about his appointment of six women to the Vatican Council for the Economy)…I chose these particular women because of their qualifications but also because I believe women in general are much better administrators than men. They understand processes better, how to take projects forward…’ (pp. 62, 67).

In this parish, of course, we know this to be true. Secondly, he writes later on about how he has tried to set up a ‘synodal’ way of making decisions in the Church, through discussion and trying to move beyond conflict and confrontation, as in the synods on the Family and the Amazon. Here he cites a good example for this from the world of international politics which it is good for people in this country to be reminded of, in this week above all weeks; here he is talking about mediation in international negotiations:

‘At its best, this is what happens, for example, in the European Union: achieving reconciliation in difference. The EU has been through a difficult period. But to watch its members reach agreement on a coronavirus bailout package – all those different agendas and views, the furious trading and negotiation – was an example of this attempt to harmonise differences within an overall effort to seek unity.’ (p. 83).

And finally he writes here about negatives forces in the world, particularly ‘national-populism’:

‘In the name of the people, populism denies the proper participation of those who belong to the people, allowing a particular group to appoint itself the true interpreter of popular feeling. A people ceases to be a people and becomes an inert mass manipulated by a party or a demagogue…a fantasy of national-populism in countries with Christian majorities is its defence of “Christian civilisation” from perceived enemies, whether Islam, Jews, the European Union, or the United Nations. The defence appeals to those who are often no longer religious but who regard their nation’s inheritance as a kind of identity. Their fears and loss of identity have increased at the same time as attendance at churches has declined (pp. 118-9).

There’s a great deal here, and I have only given you some tastes. I would encourage you to buy the book, and I hope we can organises sessions of some sort in the next few months to look at Let Us Dream, together with Fratelli Tutti. Please hold the Holy Father in your prayers at this time, especially on his birthday next Thursday.