It was a meeting of minds. Our friends Jon and Tracey had spent many years taking walking holidays all over the world. Sarah and I mentioned to them the Camino de Santiago de Compostela. Had they heard of it and would they consider walking it with a couple of novices. They agreed to the plan and we booked a route from Tui, on the Portuguese border, to the cathedral in Santiago.

The travel company we booked with was excellent. Hotels, meals were all arranged and luggage was to be transported between hotels by taxi. All we had to do was walk! To become a true pilgrim and receive a verifying certificate we would have to walk a minimum of 100kms. To prove this we were provided with a passport which we could get stamped along the way.

The Way is signposted by a shell symbol on marker posts. Day one leaving our very pleasant parador hotel in Tui, we walked through some pretty woods and wineries growing the grapes for the local Albariño wine. All was going so well until we were given the option of taking an alternative route which was longer and added two kilometres to our walk. Opting for the shorter route we ended walking along an industrial estate for three kms which included the smelliest rubbish dump any of us had ever experienced. Relieved we finally arrived in O Porrino where we stopped for a drink and were joined by fellow pilgrims who told us they had taken the other ‘very pretty’ route.

Next morning we started early and were joined on the Camino by the army who were doing a route march with heavy backpacks, and shaming us all by running all the way! Into the woods we were serenaded by a lady playing the bagpipes, who was also selling cd’s of her music. We passed on that offer and moved on to the hillside village of Mos where we stopped for the obligatory cafe con leche.

Our destination that day was As Chivas, a small village with a quaint country hostel. At dinner we chatted with an American from Phoenix who had worked in the emergency room at the local hospital all through the Covid pandemic. He told us some sobering stories that made us realise how lucky we were to be able to walk the Camino.

The hostel charged us 7 euros for the red wine that night. An absolute bargain and very good too!

Onward and upward we march towards Pontevedra. Having never heard of it, it was a revelation. Beautiful churches, chapels and a market full of fresh fish, fruit and vegetables that you would expect from any self respecting Spanish town or city. We can highly recommend Pontevedra if you are in the region.

We were sad to leave Pontevedra but we were excited to see the Monasterio de San Juan de Poio a former Benedictine site since 942 AD.

Unfortunately it was closed on the day we arrived so we moved on to Combarro, a beautiful Galician fishing village. Here there are no less than 30 horreos, stone edifices used to dry grain and fish.

Our destination was Meano which meant our stay in Combarro was confined to another cafe con leche by the bay. The remainder of the day was spent climbing the surrounding hills and was probably the hardest part of the whole walk. Meano was in the heart of the wine growing region of Galicia and the next day we visited a local vineyard to taste the Albariño wines. Suitably refreshed we walked a route back to our hotel and took a drink induced siesta.

The next day was our first taste of rain, and within half an hour we were thoroughly soaked. It was a shame as we were walking alongside a beautiful winding stream. As the day progressed the weather improved and we finally arrived at the coast. Our hotel, that night, was a disappointment but the cafe/restaurant where we ate was superb. A one man band owner who started off surly but ended up our best mate. Superb shell fish was the order of the night.

Slightly hungover we woke early to board a boat to take us up the river along the route taken by the vessel carrying the remains of St James to Santiago. Storm clouds gathered as we passed mussel farms and crucifixes on small islands that signified the way. Our skipper promised us we would out-run the rain. He was wrong. The heavens opened and within 10 seconds we were soaked.

When we arrived at the quay we hunted out a cafe that would accept ‘drowned rats’. We sat in the cafe for a good hour and a half drinking coffee and attempting to dry out.

Fortunately our walk that day wasn’t too far. We were able to dry out in our hotel and investigate the nearby town of Padron, famous for its green peppers.

We were now within a day’s walk of our destination. 27km to Santiago. We decided to get a move on. 15km further on we get a first sight of the spires of the cathedral which gives us an urge to get the remainder done. Mid after-noon we arrive in the square where we see thousands of other pilgrims congratulating each other on their achievements. We are told where to go to pick up our certificates. In a chaotic two hour wait we finally get our names written in Latin and we proceed to our hotel where we find champagne in our room from the travel company. Nice touch! 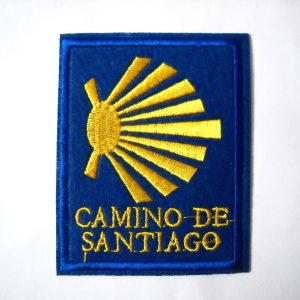 Next day we arrive early at the cathedral for the pilgrims Mass. We are welcomed by the Bishop and the church then reverberates to the sound of the magnificent organ and soaring choir.

We leave the cathedral feeling uplifted and relieved that we didn’t have a twenty kilometre walk to finish.

Camino done we all looked back on the experience with pride that we completed it and enjoyed the camaraderie of friends and strangers. Superb seafood along the way and fine local wines in a beautiful Galician landscape.

Here’s to the next one!