A few years ago I was at a large dinner in a rather expensive part of London (not a good way to start a newsletter piece, but please bear with me) where a well-known and senior Catholic politician (who shall remain nameless) admitted that he ‘didn’t know much about patristic theology’ (this is the theology of the Early Church theologians, from the period just after the New Testament to the sixth century or so). While his honesty was commendable, and if you knew who he is you would realise that he was telling the truth, at the same time it was rather disconcerting. There is a tendency these days, not only in the Church but in wider society, to make a virtue of ignorance or intellectual illiteracy, a suspicion of ‘experts,’ which our forbears and people in other cultures would find incomprehensible. You even come across teaching or pastoral programmes which feel obliged to take a swipe at ‘academic theology.’ People do feel threatened when you try and argue a case on theological grounds if it exposes that they don’t know much about the topic; I wrote a blog piece six years ago which unwisely tried to parody Barack Obama’s famous phrase ‘It’s the economy, stupid!’, causing some offence (you can read it at https://catholicherald.co.uk/brexit-debate-its-the-theology-stupid/), though whether it was the word ‘stupid’ or the word ‘theology’ wasn’t altogether clear.

The Church does not expect Christians to be academic, intellectual or particularly intelligent. We know that Our Lord and his first disciples are unlikely to have had a full scale rabbinical education; God’s preferential love for the poor has meant throughout most of human history that those perceived to be well educated are not within this group. At least one female ‘Doctor of the Church’ (the term we apply to saints with particular theological insight), Catherine of Siena, probably couldn’t read or write. But we are all expected to know our faith, to have a formation in the ‘things of God’ – and that is what theology is. It doesn’t have to be ‘high brow’, but it does have to make sense and be serious: and this is why clergy and laypeople who teach religious studies are expected to have a proper theological formation. Throughout history the Church has invested a lot of money in theological education because it is important (last Sunday we marked Vocations Sunday: it is thought that the cost of a seminarian’s formation is about £30,000 a year [training deacons costs a lot less]). If we’ve had this formation we have a responsibility to impart what we have learnt to people in a manner which can be understood: we should also learn from those whom we are asked to teach in the name of Christ. 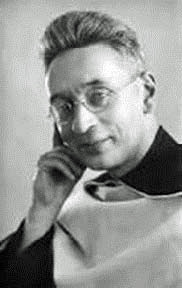 Someone who knew a thing or two about theology (and philosophy) is being made a saint this Sunday in Rome by Pope Francis, the Dutch Carmelite friar Titus Brandsma (shown here). He combined teaching theology and philosophy and being a journalist with his vocation as a priest and friar, and was murdered by the Nazis in Dachau in 1942 – he had been known as an opponent of Nazism. Many Christians, and many priests, kept silence in the face of the Nazis. The reason Brandsma didn’t was theology: what he believed about God, and about God’s creation. Whenever we affirm, as the Catholic Church does, that there is no area whatever of human life or the life of the world which is outside the scope of our faith, we are saying something theological. We can never say that a particular issue is not the preserve of our faith: this is why the Church seeks to guide us all about morality, about how we should live and about how the world should be. We would never dream of encouraging people to become Catholics – and we need to do a good deal more of this – if we didn’t try to prepare them by teaching and sharing our faith. This is simply ‘doing theology’ – it doesn’t need to be a degree course, but it is part of the same search for truth.

This is why it is important that at least some of us who teach theology in universities, seminaries and clergy formation programmes should also be based in parishes – so that different parts of the Catholic community in this country can learn from each other and pray for each other. Please pray particularly at this time for those who teach theology: a number of institutions have closed or are likely to; departments and faculties, like those in other Humanities courses, have been closed or cut back, and people have lost their jobs. In the search for truth we all need each other, and that is why theology is important.