ARCHBISHOP PETER SMITH was Archbishop of Southwark until his retirement last June, having passed the statutory age of 75. As you know it was announced last weekend that he died peacefully. Archbishop Michael Bowen died in the autumn, and had ceased to be our pastor many years ago; but this death feels more poignant because Archbishop Peter was leading us until so recently.

His funeral will be on Monday 30 March in the cathedral.

When I became a Catholic in 1994 and began formation to become a Catholic priest, Peter Smith was Rector of our diocesan seminary at Wonersh. He was unfailingly kind to former Anglican clergy like me (including those of us who were married) who were beginning a new type of part time programme and taught us Canon law: these classes were full of detailed knowledge of the rules, but also down-to-earth and practical pastoral experience and common sense. Incidentally, and this shows how long ago it was, for much of the time when you saw him in the college he had a cigarette in his hand (smoking was banned after he left in 1995). His welcome and kindness were consistent; he was also keen that former Anglicans should get to know ordinary seminarians and be taught alongside them (this was different from the practice in other dioceses).

Peter was born in Battersea during the Second World War and read for a law degree at Exeter University; he then trained for the priesthood at Wonersh and was ordained in 1972. At one point he was parish priest in Thornton Heath but most of his ministry as a priest was spent teaching Canon law at Wonersh and as Rector. 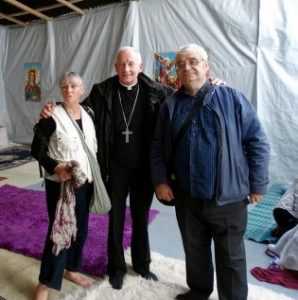 In this period he was also asked to give television interviews, particularly about difficult topics (or as he put it once, when ‘the bishops ran for cover’). So it was no surprise when the pope appointed him the second Bishop of East Anglia in 1995: he is still remembered there with much affection. In 2001 he was made Archbishop of Cardiff – this was a challenging job in many ways, but one of his achievements was introducing permanent deacons. In 2010 he returned to South London as our archbishop.

For much of the latter period of time he was Vice President of the Bishops Conference and was very active in the Church’s public witness, especially in relation to moral teaching, particularly as Chairman of the Bishops Conference Department of Social Justice. He played a big part in leading successful opposition to legislation which aimed to permit ‘assisted dying’ and was often interviewed on radio and television. The first picture  here  shows his support for refugees, an important issue in our diocese, when he visited the refugee camp in Calais (in the picture he is in the makeshift chapel). The second picture shows him with Archbishop Rowan Williams. 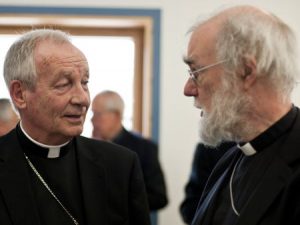 Peter was down to earth and unpretentious, with a strong sense of personal humility; he also had a good memory and cared deeply for his clergy and parishes. We last saw him at St Edmund’s when he presided at Fr Jack’s funeral in early 2017; he also came here not long ago to rededicate the chapel at Bishop Challoner school, and before that presided at Fr Steve’s induction.

It is always sad when someone who has worked hard all their life is not able to enjoy a long and happy retirement; Peter was diagnosed with cancer only a few weeks before his death; at least he was spared long suffering. I understand that in his last days when he was asked whether there was anything he wanted, he simply said, ‘a coffin.’

Peter Smith was a devoted priest for nearly fifty years and a bishop for nearly half that time. May he rest in peace and rise in glory.