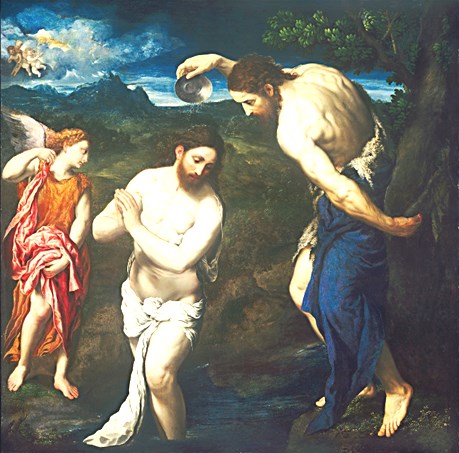 THIS WEEKEND we celebrate the feast of the Baptism of the Lord, the final day and climax of the season of Christmas. It is joined very closely to last Thursday’s feast of the Epiphany – indeed at various times both the manifestation of the baby Jesus to the Magi and the adult Jesus’ baptism have been celebrated on the same day (including also the changing of water into wine at Cana in Galilee). Both events have been summed up with the word Theophany – God revealed. A sign of God’s love for humanity is that he has revealed himself to us in the person of Jesus Christ. We do not wander around the world in a daze, without maps; we can discern and see something of God revealed to us – about who he is, and about how we are to live as his children, those created in his image.

This actually presents a challenge for practising Christians. At a point in the worshipping life of the Church when what we believe about Christmas reaches a theological climax everyone else, having started marking the festival from late November (after the poppies have been taken down) is tired of it all; so people throw out their Christmas trees some days before Epiphany; they simply can’t be bothered. And yet the imagery and message are richer than ever. Epiphany last Thursday is so rich in the narrative of the coming of the Magi: their exotic background, the message of generosity, the ways in which the Magi symbolise all the nations of the world coming to adore the baby King – there is so much there. The feast of the Lord’s Baptism today shows how the adult Jesus begins his ministry in an act which affirms so much the created order. Jesus does not need to be baptised – as he is God and free from sin – but this act not only affirms his relationship with us, but his relationship with creation. Early Christian texts about today’s feast portray the waters of the river Jordan in which Jesus is baptised as being given new life, being sanctified, because God incarnate is washed within them.

The Holy Father has reminded us in recent years of our need to respect and reverence God’s creation – including the gift of water, which we have abused so much; this feast affirms this. Indeed for centuries Epiphany and Christmas have been marked in many places by ceremonies to bless not only water as such but local rivers and the sea. Jesus baptised in the Jordan is sometimes depicted in Christian tradition as dancing within it: he sanctifies creation anew through what happens. We are doing so much damage to our planet – and what we are doing to water and the seas is a striking example of this – so this weekend is partly about creation, about the world which God has made.

Epiphany and the Lord’s baptism also speak to us of peoples of all the nations in the world drawn to the Christ child in the manger. Drawing on Old Testament prophets like Isaiah, our liturgy affirms the breaking down of borders and barriers as being central to the Christmas message. Therefore the theological narrative of these days is central to how Pope Francis has tried in the last two years to challenge small-minded nationalism throughout the world, particularly in his letter Fratelli Tutti, from October 2020, which we looked at during Lent last year. We see at Epiphany, and in the climax of the Christmas season this weekend, how far our teachings about the world are grounded in what we teach about our God, revealed this weekend. But as I have pointed out in homilies during the last week, the whole Magi narrative which we celebrate at Epiphany and this weekend has a dark side: Herod, and the fear and violence he represents in the story, is a force of darkness, evil and sin, like so many tyrants in human history. His wish to kill the baby Jesus, and the martyrdom of the Holy Innocents which we mark every year three days after Christmas – these are the things he does, like so many men with power in human history. Fear, hatred and violence are the dark backdrop to the Epiphany story. Violence is not far away.

This can help us discern the same sinfulness in the world. A year ago on the feast of the Epiphany, we saw on our television screens shameless violence and hatred in the insurrection against the Capitol in Washington. On one of the most sacred days in the Christian calendar, this act showed people all over the world the abiding presence of evil and sin. These dark forces are at odds with so much Christian teaching about how we should live in the world, teaching central to what the Epiphany is all about. The thugs who attacked the centre of democracy in the United States knew what they were doing; indeed many claimed to be acting under the banner of Christianity, a false understanding of Christian belief. Understanding the feasts of the Epiphany and the Lord’s Baptism should help us to develop the gift of discernment: to be able to see properly the world in which we live, to recognise the signs of the times; this is even more urgent when so many who claim to be disciples of Our Lord Jesus Christ are so wrong, so badly misled. For faithful Catholics we have the best of guides in Pope Francis: at the beginning of a new calendar year it is a good time to pray for him, that God will continue to guide him and give him strength.