Everything they owned was held in common

St Edmund's RC Church, Beckenham > Sermons > Everything they owned was held in common 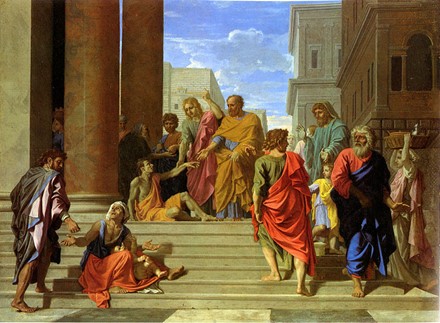 Most Catholics here are now only able to participate in Mass remotely through livestreaming or other filming (and perhaps occasionally by means of radio) – and the numbers of people doing this during the week seem to be much higher than those of ordinary weekday Mass-goers. If this applies to you then you will know that since Easter our first readings day by day have depicted the life of the early Church in the Acts of the Apostles. The picture here from Acts by Poussin shows Peter and John healing the lame man outside the Temple.

The early chapters of Acts show us the radical and counter-cultural lifestyle of the disciples of Jesus of Nazareth. In chapter 2 we’re told that the believers ‘all lived together and owned everything in common; they sold their goods and possessions and shared out the proceeds among themselves according to what each one needed…they shared their food gladly and generously.’ This isn’t a ‘flash in the pan’; later on, in chapter 4 the text says ‘The whole group of believers was united, heart and soul: no one claimed for his own use anything that he had, as everything they owned was held in common.’ The author of Acts is going out of his way to tell us that this lifestyle was central to what Christianity was about, what made it strikingly different within Roman occupied Palestine – and deeply threatening.

This lifestyle from Acts, very much a post-Easter lifestyle, has for centuries been part of the basis of the life of Religious communities in the Church. In Religious houses monks, sisters, brothers, friars and Religious priests pool their incomes and property, they live together in common. The vow of poverty in the Religious life entails not simply living as poor but the sharing of property in the way described in Acts – and it would be better described to you by someone in a Religious order or congregation. It is also part of the inspiration of modern day radical groups like the Catholic Worker communities (https://londoncatholicworker.org) which we regularly support in this parish; this is also true of Opus Dei, who have a community here in Beckenham. The Church has always needed communities of men and women called to live in this way and certainly needs them now. So this weekend pray for our Religious communities in this parish and for vocations. At the same time, the Church has always taught that we are not all called to this radical lifestyle in the way which I have described.

But the message and example we’re given in Acts has to mean something for all of us. I think there are two key messages we can discern in the midst of this terrible pandemic. To begin with, the ways in which many people are responding to the crisis suggests that they are open to a new way of living. The ways in which people are coming together to help each other with shopping, to be generous to those in need, to share resources – these do constitute a real break with many of the values of con-temporary Britain. All of a sudden, your independence, your private property, your control of what you do – mean less, matter less. We do actually all need each other. The effects of partial or complete isolation, in practical terms, are forcing us to become less selfish, less possessive, less privatised; and yet, paradoxically, this is happening when we’re actually being discouraged from having ordinary personal, physical contact with anyone outside our family or household. Now we’re a long way from the communitarian lifestyle of the book of Acts; but something may be changing. We may be learning to share more, to be less defensive and protective about our own property or resources. For the faithful Christian, private property is never something absolute: we are always part of a community, we are always defined by our relationships with others.

The lifestyle in the book of Acts challenges us internationally too. Pope Francis, in repeated homilies and statements, has called on the countries of the world to learn from this virus in very specific ways. In the face of a virus which is no respecter of international borders, the Holy Father has chided countries for their self-interest and arrogance; we’re called to sacrifice our national self-interest in favour of the international Common Good. There is no place for nationalism in the face of this pandemic. Many world leaders are at odds with the Church’s vision about international relations – based on the sharing and common life put before us in the book of Acts – and this international message of the Catholic Church is very threatening, particularly in this country and the United States. Can we really say that the United Kingdom believes in inter-national sharing, pooling of resources and commitment to the international Common Good?

So as we continue to pray for the victims of the virus and the dedicated people who are caring for them, try and draw strength at home, reading your Bibles, from the awesome picture we’re given this Eastertide, in the Acts of the Apostles.