I’m writing the front page of the parish newsletter on the anniversary of the bombing of our cathedral, St Georges, in 1941. If our churches weren’t now closed and Mass could have been celebrated as usual, we would have been taking a second collection this Sunday for the maintenance of St George’s. To cap it all, next Thursday, we celebrate the feast of our country’s patron saint, St George. I really want to talk about him and the gift of courage.

Little is known about St George. He was probably a soldier, but this is by no means certain. The only information we can rely on is that he suffered and was martyred for his Christian faith during the joint reign of the Emperors Diocletian and Maximian.

Does this matter? Should we be concerned that the story about St George slaying the dragon, saving the king’s daughter and freeing a whole community from terror belongs more to myth and fable than history itself?

I believe the story can still have a value even though it may fall short of being historically accurate because it reminds us of the nobility of defending the weak against the strong, the powerless against the powerful and the good against the bad.

As a boy who was fast approaching the day of his Confirmation, I had little understanding of the deep meaning of the sacrament or its immense importance. Equally, I struggled to find a saint I could identify with. Saints Francis, Peter and Paul were all in the running but eventually I plumped for St George. The name was incidental; what really appealed to me was the tale of a courageous Christian soldier killing the beast and saving the beautiful princess. Later I would ponder on how this great saint remained faithful to God and his Christian faith, eventually suffering martyrdom. I would also understand about how we are called to honour God before anyone else and that in order to do this we need a special courage which comes from the Holy Spirit. 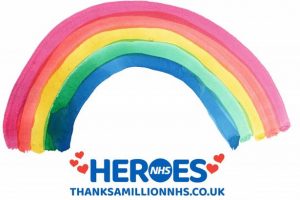 This weekend I would like to pay tribute to those people who selflessly demonstrate courage in tackling the biggest threat in our world today, coronavirus. These are ordinary people who face
danger and adversity and yet rise to the challenge. How can we fittingly celebrate and give thanks for the example they give.

Perhaps one way would be to offer them up before the Lord this Thursday, St George’s feast day: the doctors, nurses and staff in the NHS and former medical personnel who have come out of retirement to help their colleagues in the front line. Many have paid the ultimate price leaving behind bereaved families and friends. A heavily pregnant nurse died from coronavirus after giving birth to a baby daughter who is alive and hope-fully, well. The father of the mother died only days previously.

We give thanks to God for such heroism and for the lives that have been saved; at the same time we pray that God will heal the wounds of pain and loss which run deep.
I encourage you once again to open your hearts to the Holy Spirit, to thank God, to ask for his protection and to seek his will.