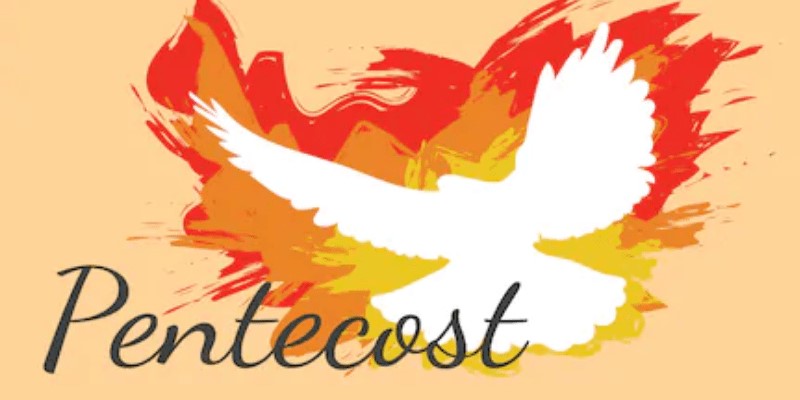 This Sunday when we celebrate the Solemnity of Pentecost it seems appropriate to hear the story of what has been described as the birth of Catholic Charismatic renewal. Patti Gallagher Mansfield has never forgotten a retreat she made while at Duquesne University of the Holy Spirit, Pittsburgh, Pennsylvania in 1967.

But we begin in the Spring of 1966, when two professors from the University commit themselves to daily prayer of ‘asking, seeking and knocking’ for a fresh outpouring of the Holy Spirit in their lives. During this time of prayer they were given two books from some friends: The Cross and the Switchblade and They Speak with Other Tongues. Both books describe Baptism in the Holy Spirit. The two men quickly realised that this was exactly what they were looking for.

In February the following year a student retreat entitled The Holy Spirit was planned and in preparation for the retreat the students were told to pray expectantly and read The Cross and the Switchblade and the first four chapters of the Acts of the Apostles.

A few days before the retreat Patti knelt in her room. Her prayer was as follows: “Lord, I believe I have already received your Spirit of Baptism and Confirmation. But if it’s possible for your Spirit to be more at work in my life than he’s been up until now, I WANT IT!”

Within days Patti and 24 students left for The Ark and the Dove Retreat House on the edge of the city. Before each session the professors told the students to pray the Veni Creator Spiritus, ‘Come Creator Spirit’. One evening there was meditation on Mary followed by a penitential service and the sacrament of reconciliation. The following day a protestant friend of the professors delivered a simple but powerful talk on surrendering to Jesus as Lord and Master. She spoke of experiencing the power of the Holy Spirit as the Apostles did and knowing Jesus intimately and personally. Patti knew she wanted the same and wrote in her notes, “Jesus, be real for me.”

At one point during the retreat the students were relaxing at a birthday party. However, finding it rather dull Patti slipped away to find more students to liven it up. Her first visit was to the chapel but on entering she found a strong compulsion to stay before the Blessed Sacrament. As she knelt Patti began to ‘tremble with a sense of awe before his majesty.’ Fearful, she wanted to leave but there was a greater desire to stay and ‘surrender herself unconditionally to God.’

She recalls praying “Father, I give my life to you. Whatever you ask of me, I accept, and if it means suffering, I accept that too. Just teach me to follow Jesus and to love as he loves.”

In an instant, Patti found herself prostrate on the floor ‘flooded with an experience of the merciful love of God.’ On finally leaving the chapel she went in search of the chaplain. Two girls noticed her face was glowing and wanted to know what had happened. Later when her knowledge and appreciation of the scriptures grew Patti came across the passage from 2 Corinthians where St Paul reflects on the illuminated face of Moses as he descends the mountain after his encounter with God. He writes, ‘All of us, with unveiled faces, beholding the beauty of the Lord are being transformed from one degree of glory to another.’

After Patti’s experience, many more students were drawn to the chapel to experience the same. One professor exclaimed, “What is the Bishop going to say when he hears that all these kids have been baptised in the Holy Spirit?” God had planned a birthday party that night and it was in the Upper Room Chapel. It was the birth of Catholic Charismatic Renewal.

More recently when reflecting on Luke 11, Patti writes, ‘Here is an unfailing principle: From the first Pentecost on, the Holy Spirit has always come in response to fervent prayer… to prayer that is hungry and thirsty for more of God… to prayer that asks, seeks and knocks.

Blessed Elena Guerra in the early twentieth century urged Pope Leo XIII to encourage the whole church to pray more fervently to the Holy Spirit and be like a cenacle of prayer. Let us do the same as we pray the prayer used for the success of the Second Vatican Council: “Divine Spirit, renew your wonders in this our day as by a new Pentecost.”