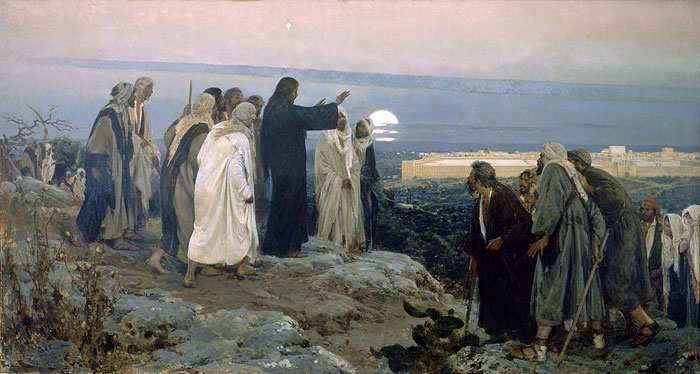 This painting shows what is known as the Olivet Discourse, the moment when Jesus shares with his disciples a vision of the last days. The painting is called Flevit Super Illam, or ‘Then He Wept’, as Jesus reacts emotionally to the fate of Jerusalem. Our Gospel reading from Mark this Sunday is a powerful description of the End of Times, and Jesus describes to his disciples the signs that will herald his Second Coming. The sun will be darkened, the moon loses its brightness, and the stars fall from heaven. This frightening imagery might suggest warfare, but also, perhaps, environmental destruction, and these are images which are very timely for this weekend in particular.

On Remembrance Sunday (as we did on Armistice Day) we commemorate the many lives lost in the two World Wars, estimated at around 100 million people in total, a truly staggering number of human beings; each with their own hopes and dreams, families and friends. At this time we also reflect on Friday’s conclusion of the 26th United Nations Climate Change Conference; whether COP26 has been a success only time will tell. The opportunity to limit (let alone reverse) the impact of climate change is rapidly running out. The promises that have been made in Glasgow still fall short of the ambitions that started the conference, but we must continue to pray that every country accepts responsibility for its Carbon emissions and acts accordingly. The future of what Pope Francis has called our common home depends upon it and the consequences could far outweigh the devastation and loss of life caused by warfare.

At the same time the nature of war is changing, and increasingly civil war and genocide have overtaken wars between recognised nation states as the most common forms of conflict. Recent research from the United States suggests that each 1o-C increase in annual temperature leads to a 4.5% increase in civil war that year, a frightening statistic. Whilst climate change may not directly lead to conflict it is an additional stress factor which inevitably increases the likelihood of warfare. For some time now the veteran anti-war campaigner Bruce Kent has been speaking out about the links between war and climate change. Each year the world spends nearly two trillion dollars on its military, and it is a figure that continues to grow year on year. Very little is said in political circles about the direct impact of warfare on climate change and yet the extraction of ore, the manufacture of weapons, the use of fuel and explosives and the destruction of infrastructure (and subsequent reconstruction) are all actively contributing to global warming. It has been suggested that military emissions alone count for 6% of global greenhouse gas emissions.

War and justice are inevitably tied together, just as the Climate Crisis also highlights the structural injustice of society around the world. The poor and disadvantaged are proportionately more affected by the climate crisis than those in richer nations. Justice should be a concern of every Catholic, because our Faith reminds us that every human being is imbued with the same intrinsic dignity. No one is dispensable.

In his 2020 encyclical Fratelli Tutti Pope Francis challenges the ancient concept of ‘Just War’. The Holy Father believes that war is now so closely woven into the fabric of our worldwide economy and our political structures that the concept of a justified war is no longer possible to argue. This is a profound change of emphasis in the teaching of the Church and we should all reflect on what this means when we remember our war dead, both civilians and military, who are all victims of systems beyond their control. Dialogue should be the best way to resolve conflict, but this isn’t always possible when those who wage war will not come to the table?

In our First Reading Daniel prophecies times of great distress and it could be argued we are actually experiencing those times now. In the words of the Gospel we do not know the hour of his coming. We should not be complacent, the time for action is now and it is our duty as Christians to promote justice on the stage of conflict and of climate. Daniel tells us that at the end of time some will be called to everlasting life and others to shame and everlasting disgrace. It is up to each of us to decide on which side of the ledger our names will be found at the final reckoning. We could allow these fears to consume us, but we place our trust in the Lord and do our best to be peacemakers and to care for our planet.

And so we pray: Preserve me God I take refuge in you.