Being able to change in Lent 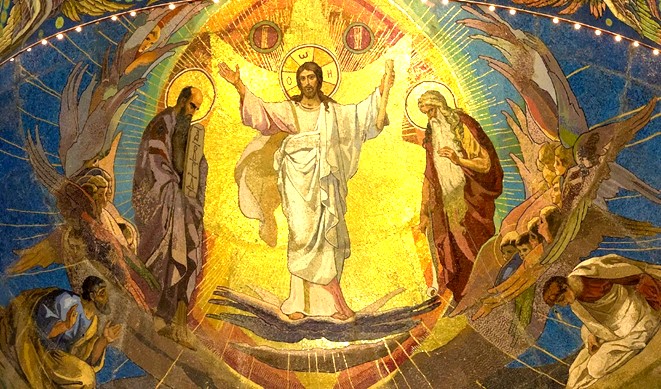 Every year in Lent the gospel reading for the second Sunday is always one of the accounts of the Transfiguration of Jesus, depicted here from the church of Belmont Abbey in Herefordshire. This year the account is from the ninth chapter of the gospel of Mark. This event is one of the Mysteries of Light of the Rosary and is also marked by a feast day on 6 August. We hear this gospel in Lent because of the dramatic change in Jesus’ appearance as experienced by his disciples, a change which foreshadows the glory of the Resurrection; this change and transformation is also a model for the Church. In the first place this is for those who normally, here, and all over the world, seek in Lent to be baptised or received into the Church at Easter, through the RCIA process; this process of conversion is about change. Similarly, for all of us Lent is about conversion, about a capacity for change, enabling us to move from sinfulness to glorification.

Our parish Lent programme started on Wednesday, focussing on Pope Francis’ letter published last October, Fratelli Tutti, and in the first session (and you can watch the recording of the talk via our webcam) we went through the first chapter of the letter, ‘Dark Clouds over a Closed World.’ Something which is really great about the letter is the way in which the Holy Father joins together his analysis of the problems of the world with guidance about the everyday lives of ordinary Christians, you and me: his message of social fraternity applies across the board. Lent is about temptations, and one temptation is to narrow Lent down to our personal lives, succumbing to the individualism in so much of contemporary culture which the pope identifies in his letter.

Lent is about change – about transformation, conversion, moving from one place to another. This is true, hopefully, in our own lives; but each Lent the Church asserts that it is also about the world. Hence CAFOD Fast day which we kept on Friday, linking Lenten self-denial to helping the poor of the world whom God loves. For the last year, this time of pandemic, the pope has repeatedly told us that in the midst of all this suffering we are being given the opportunity to change the world, to rebuild a better world. In the first chapter of Fratelli Tutti which we looked at on Wednesday the Holy Father writes, looking at the effects of pandemics and other historical calamities:

‘All too quickly, however, we forget the lessons of history, “the teacher of life”. Once this health crisis passes, our worst response would be to plunge even more deeply into feverish consumerism and new forms of egotistic self-preservation. God willing, after all this, we will think no longer in terms of “them” and “those”, but only “us”. If only this may prove not to be just another tragedy of history from which we learned nothing. If only we might keep in mind all those elderly persons who died for lack of respirators, partly as a result of the dismantling, year after year, of healthcare systems. If only this immense sorrow may not prove useless but enable us to take a step forward towards a new style of life. If only we might rediscover once and for all that we need one another, and that in this way our human family can experience a rebirth, with all its faces, all its hands and all its voices, beyond the walls that we have erected. Unless we recover the shared passion to create a community of belonging and solidarity worthy of our time, our energy and our resources, the global illusion that misled us will collapse and leave many in the grip of anguish and emptiness. Nor should we naively refuse to recognise that “obsession with a consumerist lifestyle, above all when few people are capable of maintaining it, can only lead to violence and mutual destruction”. The notion of “every man for himself” will rapidly degenerate into a free-for-all that would prove worse than any pandemic’. (sections 35-36)

For Francis, the big problem in the world is that we have walked away from ‘belonging and solidarity worthy of the name.’ The rise of populist nationalism – in this country, in the rest of Europe, in the United States, elsewhere – has turned people in on themselves, making us fearful, suspicious, resentful. This is a spiritual and moral problem. Many of the mistakes which political leaders have made in the last year, here and elsewhere in the world, have been made because of this basic moral failure, moral failure for which people are accountable.

This is why Fratelli Tutti is such a good guide for all of us this Lent, and a good guide for all of us as we try, in spite of all the problems we face at the moment, to renew the life of our parish. This letter is not simply for those who are concerned with social justice: it is for each one of us as baptised followers of Jesus Christ, transformed on the mountain in front of Peter, James and John. The letter is easily downloaded from www.vatican.va and we have also made available on the website a very clear ‘infographic’ which summarises it, and the slides which accompany last Wednesday’s talk.