A Man for all Seasons 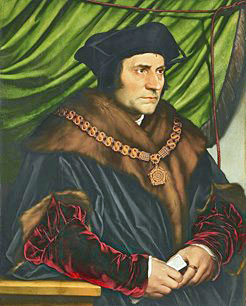 Wednesday was the feast day of St John Fisher and St Thomas More. At one of the Masses I recounted how a couple of decades ago Pope St John Paul II declared Thomas More to be the patron saint of politicians. At that time I was chaplain to the Mayor of Bromley (Councillor David Crowe), and my principal duty was to say brief prayers before full Council meetings in the Town Hall. I alluded to Thomas More being the patron saint, and I could hear a light giggle, not very well suppressed, around the council chamber. For some, back in 2001, it seemed absurd that this should be so. The pope did it as a way of trying to affirm the political vocation, a vocation which the Catholic Church values and sees as important: by then people all over the world had lost trust in politicians.

The problems of which people were aware then seem to be child’s play compared to where we are now, certainly in this country. Widespread corruption, contempt for the truth, a sense of entitlement grounded still in an appalling culture of deference, an obsession with making as much money as possible, contempt for political opponents (including Trades Unions, refugees, migrants, those written off as ‘woke’), nationalistic and xenophobic foreign policies (I write this on 23 June…), a glorification in militarism, in this country the culpable and irresponsible errors (costing lives) at the beginning of the pandemic (and many current policies are questionable, as infections rise again), the ways in which people really suffering in the world (such as the people of Ukraine) are used to further politicians’ careers….the list is endless. The shamelessness of all this seems much worse than it was at the beginning of this century. These are men and women who think they can get away with anything. As if that were not bad enough, some of the worst offenders among politicians in this country are Roman Catholics. Apart from anything, in all these respects the conduct of politicians is at odds with Catholic teaching.

In line with what the pope did local churches have tried to turn things round and instil better and improved values. For much of these two decades the Catholic Bishops Conference in this country has run a special Faith in Politics programme (website here) for recent graduate interns. These young men and women are maintained and supported in London and receive spiritual and intellectual formation (they at times have studied Catholic Social Teaching). The culture has become so toxic that you might think that the interns, and the Church, have got their work cut out, but to give in to cynicism and despair is to hand a victory to those who do so much to damage integrity in public and political life. If any of you reading this would like to know more about the interns’ programme, do contact me.

Thomas More, along with John Fisher, was beheaded by King Henry VIII in 1535 because of his refusal to recognise the attempt of the king to marry Anne Boleyn, and his refusal to affirm Henry’s takeover of the Church. One of the foremost lawyers in England, and an influential writer, he represented the best that England has offered to the Church: I am sure some of you are familiar with the film A Man for All Seasons, based on Robert Boult’s stage play. John Fisher was Bishop of Rochester (and named a cardinal by Pope Paul III shortly be-fore his execution) and because the medieval diocese is within the Catholic diocese of Southwark in the 20s and 30s the campaign to raise money for the canonisation process was spearheaded by our diocese (hence also there are many parishes and schools dedicated to both saints). They died because of integrity and the primacy of conscience; they also challenged the usurped power of the State, of the English monarchy. None of these values seem evident among politicians, including those who profess the Catholic faith, so the prayers of Thomas More are urgently needed, that sinners repent and that political life in this country can perhaps emerge from the gutter. True love of country, and a patriotism worthy of the name, will see how the example and prayers of Thomas More are so precious, however bad things are. Patron saints are important, giving us good and worthy role models and friends in heaven.